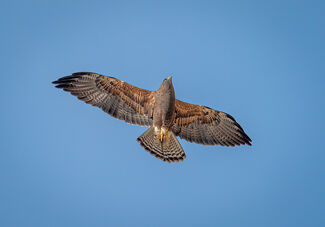 Any day now, you can expect Borrego Springs to see a flock of incoming visitors, and a well-organized welcoming committee is ready to greet them. These visitors make an annual appearance, but don't hit the traditional tourist spots.

They are Swainson's hawks that annually pass through our community on their lengthy migration from South America to as far as the northern reaches of North America.

The welcoming committee is led by Hal Cohen, a retired biology professor and birder who began monitoring the hawk migration here 20 years ago. Because of the spectacular nature of the migration, bird lovers and interested observers come from all over to get a glimpse of these magnificent birds.

Cohen said birds have already been reported just to south of Borrego and the leading edge of the migration could reach here anytime soon.

"After 20 years of monitoring the hawks, I believe I understand the migration pattern. Hawks exit Mexico on the way north and follow traditional routes. They are opportunistic feeders and are attracted to mainly insects during migration. However, if a rodent or reptile presents itself, hawks stop for a snack," Cohen said.

Apparently, that has happened near El Centro in the past few days.

"A flooded area along Forrester Road near the Alamo River not only has attracted insects from nearby but also those in the soil have come to the surface. The hawks see several other species of birds on the ground and zero in."

Once they birds have gotten their fill, they will resume their northward journey and Cohen feels there is a 50 – 50 chance that the migrating birds will continue their normal flight path that will bring them into Borrego Valley where they have historically found food for thousands of years, mostly the large green caterpillars that are more abundant in good wildflower years.

"Unfortunately, the Drought condition has eliminated us from the traditional migration path because of no caterpillars, flying ants, grasshoppers, water beetles, etc.," Cohen said.

At any rate, there will be birds and for the next several weeks, volunteers will be out every morning and evening to keep track and record Swainson Hawk numbers.

Last year was also not much of a wildflower year, but despite predictions that migrating hawk numbers might be low, it turned out to be a near record when the migration was over. It ended up being the fourth best year, with more than 5,400 hawks counted. Cohen said it was the best count they have had during a year without many caterpillars. The peak count came during the Super Bloom of 2017 when 11,690 birds were observed. The fewest number of 1,086 were recorded in 2019, but that was inaccurate because an unusual number of birds passed through after the official count had ended.

The official count is conducted every morning when keen-eyed observers watch for the hawks to launch from overnight roosts.

It can be an impressive sight.

The long migration requires the birds to conserve energy, so they will launch by gently pushing off and capturing the warmer columns of air rising from the desert floor.

They then circle and climb by riding the rising air currents until they can capture winds that will assist them in moving north. As birds join the rising column of air, they gather into a formation known as a kettle that can often contain 600 birds or more. No wonder this spectacular sight attracts birders and interested nature lovers.

Every evening, volunteers also head into the field to see where arriving birds are roosting for the night. This information is passed on to assist counters in locating the birds as they launch the next morning. Arriving hawks will settle into trees in Borrego Valley, often concentrated at a date farm along Borrego Springs Road north of Palm Canyon Drive.

Cohen said he also needs additional volunteers to assist with morning counts and anyone interested can reach out to the Anza-Borrego Natural History Association for information or contact Cohen at raptorhal3@gmail.com.

Cohen began the annual Hawkwatch after it was recognized that Borrego Springs was on the migratory route for the birds.