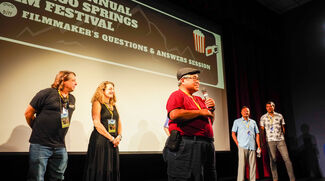 From its inception nine years ago, the Borrego Springs Film Festival (BSFF) has grown into an integral part of life here in this quiet little town, and Fred Jee should be proud of his brainchild having matured into a strong voice for filmmakers not only here in the U.S., but also from around the world.

With over 90 films to choose from during the five-day festival (March 24 – March 28), audiences looking for special film moments we've all come to expect and appreciate gathered at the Borrego Springs Performing Arts Center and enjoyed themselves. And not only were there films – both paid for in two-hour blocks and those with free admission – but parties at the De Anza Desert Club for the opening gala and a weekend party at the Pam Canyon Resort, industry networking at the Borrego Art Institute, and special screenings at the Library. It was all a far cry from evenings spent watching films through our car windshields at the Mall parking lot during the height of the COVID pandemic. While COVID protocols were still in place this year, they were far less restrictive.

This is the first of a two-part series on the BSFF, focusing on two films – both from Block-A on March 24, plus a review of local actor-writer-director-producer Russell Webb's film "A Gift For All Ages," his film adaptation of a stage play.

So, let's get started! Having been born and raised in Hollywood, California I've been a film buff all my life. And I have come to appreciate the process of film making and viewing according to three broad categories: 1) Visual-Audio-Editing, 2) Storytelling, and 3) Dialogue-Desire Line-Dramatic Conflict. Desire Line reveals what the character wants and how it conflicts/supports others' desire lines; dramatic conflict is not about shouting or punching. For simplicity, I've assigned 10 points to each category, with a score of 30 being what I subjectively perceive to be the perfect film. For example, regarding Hollywood blockbuster movies, in my book "Avatar" reached that 30-point acme of perfection.

Two of the films in Block-A made my 30-point score – the 12-minute Narrative Short "Frank and Emmet" by Carlos Puertolas, and the one-hour Documentary "Vietnam: Fast Forward" by director Eladio Arvelo.

For "Frank and Emmet" (and jumping over Categories 1 & 2 because anyone who saw the film would agree those elements were exceptionally well done), I'll dwell on Cat-3. The unique way Carlos Fernandez Puertolas presented the "dialogue-desire lines-dramatic conflict" elements between a puppet master (Frank), his singing/talking long-time puppet-partner (Emmet), and his granddaughter were so subtle and understated that when it finally emerged (via looks and tone but never stated specifically) that Frank was dying, with Emmet being left to carry on without him, everything said and implied prior to that moment flashed like lightning, then crystalized. A woman seated near me was in tears. It was a great moment, and "Frank and Emmet" subsequently won the Festival category for Best Narrative Short Film.

The last film in Block-A was surprising because I expected to see the sad remnants of a war-torn country where 53 years ago I spent 365 days of my life as a U.S. Navy corpsman in Da Nang. Admittedly, my 30-point score for this documentary was subjectively biased, to be sure, based at least in part on my own personal experience. Nevertheless, this documentary was not about the horrors of humanity and damage inflicted on both property and people, but about recovery and hope for a better future via entrepreneurship on a level unsurpassed anywhere in the world: 50 percent of all Vietnamese households are currently engaged in some kind of small business activity, and a once pitiful nation state is now one of the world's fastest growing economies.

Director-Cinematographer-Editor Eladio Arvelo and story writer-film narrator Shareef Haq shot the entire film with a small camcorder, under the radar and without permits, in just 30 days. They captured not only the entrepreneurial history of individuals striving to make good for themselves, their families, and future generations, but also the fire in their bellies that all but insisted on success, despite serious obstacles.

It's about inspiration, the energy and excitement that makes the people of Vietnam unique: A Tourism Entrepreneur in Ho Chi Minh City (formerly Saigon) inspired by the quest for independence by Ho Chi Minh himself; a farmer and wife with a very Zen outlook on life who supply top-grade tea to the world; near Hanoi, a fiercely independent and hard-working woman who owns her own island, "Quiet and peaceful," she says, and supplies tea to the Zen farmer; a female coffee farmer with a love of coffee since she was four years old and who recognized the potential global market for great coffee; a female rice farmer with fresh ideas on how to maximize rice yield (300 kilos) in a small field, and it's all just for their families.

On the subject of work ethic, "Normally, only women work," says the farmer, adding, "If men understand, they work far away. If not, they just stay at home and drink"; a fisherman who took to the sea at 13 to feed his family but switched to the more lucrative market of shrimp, and he and his family have thrived ever since; from humble beginnings as the daughter of a rice farmer, the female CEO of SavvyCom Software specializes in mobile and web solutions, and she acknowledges that many women do different jobs just to survive and take care of their families. She was recognized by the World Bank as one of 15 global leaders to watch; and there are other participants in the documentary worthy of note – for examples a wildly enthusiastic chef and the founder of an acoustic bar for musicians to explore their craft – but since space is limited, I'll turn to Huong Dang, a Social Entrepreneur with an extraordinary history on her way up the Vietnamese socio-economic ladder.

Huong wanted to create an impact in her community, to support young entrepreneurs, mainly women, where the Vietnamese female labor force participation rate is 73 percent, above and beyond all other world economies. She's passionate, committed, and focused on young Vietnamese women. Inspired by the older generation – mother and grandmother in her case - she's trained women to achieve a vital market presence in service industry management throughout Vietnam; she's also trained women to rise above certain domestic situations of abuse and violence.

Huong was born to a single mom in a small village, and because her mom was sick, she left school at age 12 and moved to Hanoi. She earned $10 per month working 18-hour days. She sent all her money home to help her mother, brother and sister, and did not want to get married or suffer the misfortunes of a "normal" Vietnamese lifestyle. That wasn't the life she wanted, but she had no friends or family and lived a meager existence, at times sleeping on stairways of a landlord, being treated badly by the locals who stole her money or didn't pay for work she did for them. She went to school at night to get the education and training she needed to move up in the world; she cleaned houses and shops during the day. Living what she termed "a dark life," she didn't see much hope for her future. But through persistence and resolve, she overcame all that, and then became a member of KOTO (Know One, Teach Others) that she says changed her life. She definitely paid her dues to get where she is today.

This film is a shining example of how documentaries can inform us, providing a real-world picture of how things are in comparison to what we thought they might be. Makes me want to go back to Vietnam and see for myself.

Russell Webb's film, "A Gift For All Ages," is purposefully reminiscent of such black and white films in the 30's such as "It's a Wonderful Life." Shot and produced here in Borrego Springs and set in 1823, "Gift" explores the fanciful origins of the now world-famous poem by Clement "Clark" Moore, "Twas the Night Before Christmas."

Stuck with writer's block, Clark and his wife have a friendly tug-o-war with a metal bin, accidentally tossing it out a 2nd-story window where it lands on a stranger. They usher him into their home, but now having amnesia, this likeable stranger doesn't even know his own name. But a card he's carrying includes the name St. Nicholas, so he's assigned the name of "Nick" and invited to stay in the apartment during his recovery.

Clark's wife, Catherine, is suspicious of Nick, who doesn't offer any money for his keep. She witnesses him receiving a wad of money from a member of the clergy, but she leaves before he hands it all back as a donation.

Clark carves wooden figurines (later recognizable as reindeer), loves to bake with a chef-hat wearing cook (later recognized by his pointy ears as one of Santa's elves). He's Santa! Most importantly, good ol' St. Nick pulls Clark out of his writing slump, and we experience the first lines of Clark's masterpiece poem, "Twas the night before Christmas, and all through the house..."

Co-directed by Alicia Wszelaki and co-produced by Fred Jee, this 37-minute Narrative Short film adapted from a stage play took its time to develop (and has the feel of a stage play, too), but was visually satisfying, well edited, provided interesting characters a unique story line with a beginning, middle and end, and the dramatic conflict and desire lines were clear and rang true. I'm giving this film a 25 out of 30, with extra credit because local actor Russell Webb played his part so well, plus the fact it was filmed and produced here in Borrego Springs.