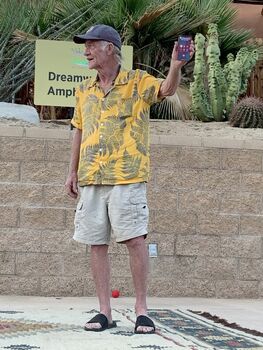 Michael holds his phone out to the audience to hear it ringing.

I've paid a lot more and got a lot less for my money than the entertainment provided by magician Michael Budd. He performed his one hour of magic for free at the Springs at Borrego's Dreamweaver Amphitheater on April 2, and his repertoire of tricks amidst a very humorous commentary kept the crowd of 75-100 people awed, applauding, or laughing the whole time.

Budd began with a "name your card" trick where he wrote down on a piece of paper the answer to his question to an audience member who merely thought of a card. "Is it the six of spades?" Budd asked. "No," the man replied amidst his and the audience 's laughter. "Well, I did it!" said Budd. "I guessed your answer!" He turned his paper over and revealed in big block letters the word "No." The audience cracked up.

Next up was his "memory test," where he claimed to have memorized an entire 50,000-word book by Sherlock Holmes. He chose a random assistant from the audience, Lilian, and they stood back-to-back so that he could not see from where she was reading. He asked her to pick a page anywhere in the book, during which time Budd stealthily pulled out his own copy of the book (the audience was now in on the gag) and asked her to tell him the page number, and for Lilian to read the first line in the second paragraph. She did, he found it, and he read aloud the second sentence, as if he had indeed memorized the entire book. With the audience in on the gag, it was only Lilian who was shocked and amazed as to how he did that (and another test), until they stood side-by-side on stage, and she saw the book in his hand. It was great fun watching all of her reactions and listening to his commentary. To add to the gag, he flipped open the pages of his copy of the book, revealing all the pages were blank. But it was what Budd did with me and my iPhone up on stage that showed up as the niftiest magic trick anyone, myself included, had ever seen. I told the audience I was going to report the story in the Sun and wanted to be sure there was no funny business going on. He asked to see my iPhone, and he drew a picture of it on a business card, replete with a number pad and other buttons. He then asked me to type my phone number out on the business card (not on my iPhone) for all to see.

My phone began ringing, and the audience heard it (see photo). The header at the top of my phone said "Michael Budd." I answered, and we actually engaged in a conversation. He even removed his microphone headset and we continued. I didn't ever give him my number, so now he managed to swipe it out of thin air and contact me will forever be a source of technology-driven mystery. Members of the audience I spoke with had the same dumbfounded response.

His interaction with various audience members throughout his performance showed off the talents of a true professional with a unique style and substance. He appeared on the very first America's Got Talent show and has won top magic awards. Michael Budd is the son of RoadRunner Club residents Lonnie and Randy Budd, and he says he'll be back next year. You won't want to miss that one.