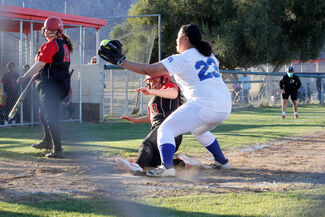 After a wild pitch, senior pitcher Brianna Del Bono gets the go ahead to head home and slides her way in safely.

The Borrego Springs High School softball team opened its season at home March 8 with a mercy rule win over the Bonsall Legionnaires, 21 – 3.

The team also faced the Calipatria Lady Hornets on March 10, where they lost 17 – 7.

The Lady Rams traveled on March 17 to face off against the Lady Legionnaires, in hopes of repeating another mercy win. This took place after print.

In the first game against Bonsall, senior pitcher Brianna Del Bono, a stellar pitcher for the Lady Rams, did what she did best on the mound, striking out three, and allowing just one walk to begin the inning.

The Lady Rams offense showed out in the bottom of the first, going through the lineup, being first on the board.

After being hit by a pitch and taking one for the team, senior second baseman Isabel Arteaga was the Lady Rams' first base runner of the game.

With two on, Del Bono smacked a shot down right field, enough to bring both runners home, and herself, for a three-run inside the park home run, 3 – 0 Lady Rams.

The Lady Rams continued to add on. With bases loaded, junior right fielder Hannah Strate walked in a run, after also being hit by a pitch.

After two more walks and wild pitches, the Lady Rams were up, 6 – 0 in the bottom of the first.

It wasn't long for the Lady Rams to be back at the plate, as Del Bono worked a three-up, three-down, all strikeouts.

Del Bono was back at the plate, getting a single. She was then brought home after a single by junior third baseman Jimena Ochoa, to extend the lead.

Senior catcher Natalia Carmona managed to earn an RBI of her own with a triple to follow. She then took advantage of a wild pitch, and came home, but an awkward slide at the plate came back to bite.

The Lady Legionnaires began to pick up some momentum in the top of the third inning.

After a catching change for the Lady Rams due to the minor injury of Carmona, the Lady Legionnaires took advantage of the weakness.

Back-to-back walks were issued, and a wild pitch, this put Bonsall on the board, 9 –1.

Del Bono managed to get the next batter to strike out looking, but then a single to the next. She got the second out on another strike out.

It was yet another catching change for the Lady Rams, which brought out some wild pitches and walks. However, only two more runs for the Lady Legionnaires, limiting the damage to just 9 – 3.

Now it was really a game, and the Lady Rams were on it, with yet another round of going through the lineup nearly twice.

Senior centerfielder Angelina Sanchez and Hernandez managed to get on base with walks, and it was yet Del Bono again at the plate with a chance to bring them home.

What could have been a two-RBI triple, Del Bono got the go-ahead to come home.

The Lady Legionnaires could have easily trapped her with four players crowding near the third base line, but with smooth, quick speed, Del Bono slid right through safely, 12 – 3.

The Lady Rams then continued to have a walking party, racking up the runs on the scoreboard to extend their lead.

In the top of the fourth, the Lady Legionnaires tried to find some weak spots in pitching and in the catching behind the plate, but could not do much.

Just like that, three-up, three-down for the Lady Rams in the top of the fifth, it was game over, thanks to the mercy rule in tact.

The team knows what needs to be worked on, and consistency is key as the season progresses.

The Lady Rams are back at home on March 22 to face off against Calipatria once again, in hopes of avenging the loss from earlier. First pitch is at 3:30 p.m.