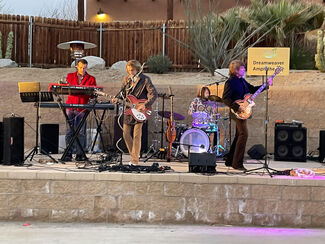 What a terrific night for the Borrego Springs Rotary Club Fundraiser on March 5 at The Springs RV Resort Amphitheater. In the afternoon, there were 40 mph gusts of wind with rain in the forecast. Two hundred tickets had been sold, but only one hundred people ventured to the event.

The Rotary Club has been supporting students and community needs since 1987.

The rain was circling and started to spit at about 5:30 p.m. when the band started to play. Somehow, the heavy rain stayed away, although raining in most of Borrego, the wind also died down.

Attention was then focused on the band "Lucky Tongue," which the town has embraced as their own. People were dancing and rocking away even though it was dark and cold. The heaters helped at the interval when the crowd descended on the food and drinks supplied by establishments in Borrego.

The audience, well refreshed and fed, greeted the second half of the bands performance with great enthusiasm, dancing the night away.

What could have been a total disaster, ended up a great success, with rotary satisfy with the monies the event raised.