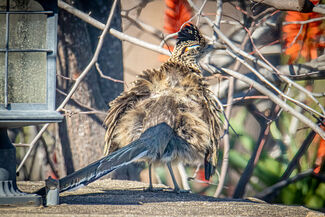 The iconic greater roadrunner is synonymous with the desert and thanks to the comical antics of The Road Runner and Wile E. Coyote, bring joyful excitement to visitors who spot one when in Borrego Springs or nearby Anza-Borrego Desert State Park.

This large bird who is a member of the cuckoo family is a native to Southwestern deserts, but despite living in the often hot and arid place, it does get cold at times.

Recent chilly weather is a good example, and the roadrunner has a unique way of warming itself up on those crisp winter days.

Like all birds, feathers are a good insulator that offer the roadrunner a protective overcoat, but when it gets cold, you may be lucky enough to spot one sitting with back to the sun and feathers spread, exposing dark skin and a downy layer of dark feathers.

The darker color absorbs heat from the morning sun and elevates the bird's body temperature.

Just like you and me, the roadrunner functions better when warmed up, so this technique will allow them to shake off the morning chill and return to feeding.

Also known as a paisano, desert chicken, snake killer, or chaparral birds the roadrunner feeds on insects, crawly things like spiders, scorpions, lizards and snakes, eggs of other species, small birds and even hummingbirds.

The roadrunner even kills and eats rattlesnakes, being apparently immune to eating the venom of the snake.

Roadrunners are tolerant of humans, often coming very close while feeding. I have had them show up on my patio, less than 10 feet away while they squatted in hopes of snatching a hummingbird from my nectar feeder.

As a side note, I elevated the height of the hummingbird feeder and that significantly reduced his success rate.

A healthy garden will provide food and habitat or many of the insects and smaller critters that the roadrunner likes to eat. It will also give you a chance to spot one of the delightful creatures that also call the desert their home.