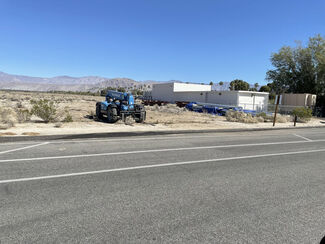 Passing by the vacant lot west of JT Tire Pro's near the intersection of Palm Canyon Drive and DiGiorgio Road, steel framing and other materials have been offloaded by forklift and transported to the east end of the lot. For what? A Dollar General Store.

And one might think that permits had been issued for grading and/or building of a new business in town.

Well, Sponsor Group (SG) chair Rebecca Falk was caught off guard, and was only notified the day of the Sponsor Group meeting (March 3) that a permit application was submitted at a new site.

After speaking with the county, despite a permit application being submitted, Falk was told the owners have not been granted approval for grading, much less actual construction. Inspectors from the Department of Planning Services said they will be out in the coming week to review the situation, according to Falk.

The SG is set up under County guidelines to provide advice and recommendations to developers who are building a "discretionary project," which the Dollar General is not. And the SG has no veto power on approval of any project, discretionary or not, but rather can only ask the County and developers to comply with community standards. The Sponsor Group will be discussing this issue at their next meeting, April 7.

For the Dollar General store, sentiments are mixed in Borrego, between those who see discounted items an advantage to a community containing many low-wage earning families, versus those who see unfair and/or unnecessary competition with existing retail establishments.

And then there's FEMA, a federal agency involved with flood plain building restrictions, which will have to decide what if any construction modifications are required to alleviate potential damage in that flood plain. FEMA compliance required our new library to be elevated, now resting on 60-foot long steel-reinforced concrete friction pilings. Expensive to say the least, so who knows what they will have in mind for Dollar General.

If many remember, the Dollar General had plans to open a store in Borrego back in 2020, proposed to be located at the intersection of Palm Canyon Drive and Country Club Road across from the XL Gas Co. They had posted help wanted ads online for an assistant store manager and retail clerks for the store.

At that time, it was a bit premature to hire, considering escrow on the land acquisition had not closed; a discretionary permit before moving one bush or rock was needed still; and well, it's Borrego, and Borregans sort of like to have a say in such matters.

The Sponsor Group did send a letter to San Diego County Planning and Development Services (PDS) expressing concerns discussed at a meeting held in January 2020.

The good news is that Dollar General will not be greeting customers until they receive the proper permits, which could take months. And that will give Falk an opportunity to request the owners or reps be present at an SG meeting to make a presentation and answer questions from members of the SG and the public. Owners and/or reps can attend or not attend, it's up to them.

Falk will further discuss the Dollar General store dilemma in the March 31 issue of the Borrego Sun.