Big Dipper Through the Millennia 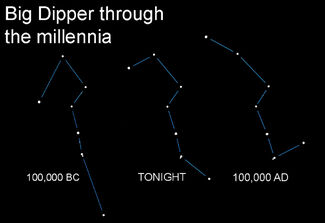 The Big Dipper's five central stars are stellar siblings; they were born from the same interstellar cloud some 500 million years ago and still travel together at remarkable speeds.

Decades of living and working on this planet have taught me many lessons, but one appears truer than most: Whatever seems temporary is permanent, and whatever seems permanent is temporary. This applies everywhere: buildings, governments, relationships... things we're convinced are everlasting are almost always destined to change. And those that we're told will be only temporary – taxes, detours, visits by in-laws, well, they often turn out to be permanent! Even the heavens, which we humans perceive as eternal and unchanging, are only temporary. While we often refer to the stars and constellations as being "fixed" – especially when we watch the moon and planets drift gracefully in front of them – most are actually moving in random directions at speeds of many miles per second. Because the stars reside trillions of miles away, however, we're not able to notice their movements with our eyes alone over relatively short periods, so we perceive them as fixed.

If we are patient, however, we'd be able to see reality. Take, for example, the stars of the Big Dipper, now appearing in the northeastern sky after dark. To most of us in the Northern Hemisphere, this celestial icon is one of the first star groupings we learn to recognize. Every scout has used it to find the North Star and to find directions during the night. Its shape has been represented by various cultures throughout history as a bear followed by three warriors, a wagon, a plow and, to the Chinese, as the government itself. Its "drinking gourd" shape even served in song to inspire pre-Civil War enslaved people to flee northward to freedom.

We've come to recognize the seven stars of its bowl and long curving handle to be about as permanent a sight as there is. What we see as the "Big Dipper", however, is not real. It's not a solid structure, but purely an optical illusion that occurs because of where we live in our galactic neighborhood. If we could fly freely through space and travel to the other side of those stars, we would discover that our perception of the Dipper would change along the way. The "dipper" shape we create in our minds is fluid over time as well. Its five central stars are stellar siblings; they were born from the same interstellar cloud some 500 million years ago and still travel together at remarkable speeds.

But seeing this movement is another matter altogether. If we could accelerate time and watch this star grouping for tens of thousands of years, we would begin to see how its stars move through space, and how the shape we know as the Big Dipper would change.

A hundred thousand years ago, the first Homo sapiens might have recognized this stellar collection as a celestial fishhook rather than a dipper. Our descendants a hundred millennia in the future will also see the shape of a dipper, but one that is distorted and reversed from what we see today.

So, the next time you think about heading outdoors to enjoy the stars and constellations, don't put it off too long. Remember: Whatever seems temporary is permanent, and whatever seems permanent is temporary!