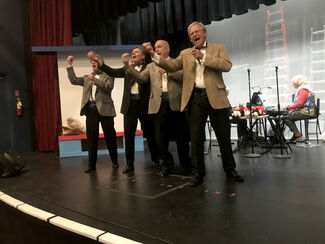 In a departure from normal coverage of BSPAC events on the evenings of a weekend production, I attended a rehearsal of Act II of "Forever Plaid," and I'm here to predict that Borregans with fond memories of the '50's are going to love this production.

Plaid has been 10 months in rehearsals, and its director, stage and vocal dynamo Sherry Harapat, has her eye on providing a fun evening that rely on both harmonies and humor for the pleasure of Borregan patrons at BSPAC.

The story, on its face, dwells in the world of the surreal, where all members of an all-male quartet are killed in a car crash while on their way to their first big gig, and they perform, via "special dispensation" from the powers that be, "a concert that never was."

"The 50's were a time," writes Plaid author and choreographer Stuart Ross, "when every family worked to fulfill the American Dream." While other popular groups had their own styles – mainly rock 'n roll – there were others who showed the flip side – musical harmony, innocence, and sincerity of their dreams, too.

Sets and costumes were at a minimum for this rehearsal, but the performances by Low Tenor "Frankie" (Dick Helvig), High Tenor "Jinx" (Alan Tulving), Bass "Smudge" (Steve Ewens), and Baritone "Sparky" (Garold Edwards) show all the signs of providing an innovative, unique and compelling story and great vocal harmonies with unique 50'style.

A riff on a Beatles tune, Plaid style, is quite extraordinary. But there are also Calypso antics and audience interaction in the song "Matilda" that will get your blood flowing and feet tapping. A bit of nostalgia from The Ed Sullivan Show is no less than frantic, what with all its fast-paced visual clues that cover every performer I can remember.

There are, of course, parts of the show that will go unreported here so as not to give away too much, but I will report there will be a contest for the best plaid apparel by an audience member, and the prize is nothing if not unique.

Tickets for the three-performance weekend starting March 11 are on sale at the Fudge Factory or visit http://www.bspac.org.