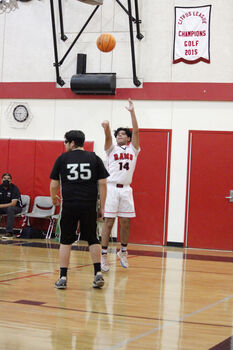 Sophomore Brody White saves the ball on the baseline to keep it play.

It was a battle of the backcountry as the Borrego Springs Rams basketball team took on over the hill rivals the Warner Springs Wildcats on Jan. 28 at home.

The game started off fast-paced, as both teams fought with aggression.

With 5:23 on the clock, sophomore Brody White hit two free throws to get the Rams on the board, 2 –0.

The Wildcats answered back with back-to-back shots behind the arc, 6 – 2.

Two minutes left in the first quarter, White sank in another free throw to cut the deficit in half, 6 – 3.

As the clock winded down, junior Julio Medina putback the rebound, as the Rams were down by just one.

In the second quarter, the Wildcats had all the momentum on their side and continued to add to their lead. They continued to connect with the basket, and it was smooth sailing for them.

With two seconds left, White made another trip to the free throw line, sinking one, 21 – 6 at the half.

The third quarter was a change of pace, and was much slower as both teams were more on the defensive side.

The Rams began the fourth quarter with an underarm layup.

White added to the board for the Rams with a tip-toe on the baseline and a floater, 25 – 10.

Midway through the fourth quarter and the game, the Wildcats had back-to-back steals and put up layups to extend their lead.

With two minutes to go, the Rams managed to score twice with a jumper by Medina and a three-pointer, 29 – 15.

That would be all that each team would be able to get as the clock wound down, and the Rams were unable to complete the comeback.

It was not the outcome the Rams hoped for, but they played as hard as they could.

The team will be at home for the final time on Friday Feb. 4, 5 p.m. against West Shores.