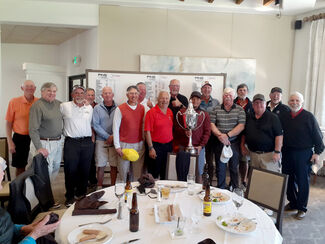 On Feb. 3, the Borrego Springs Men's Golf Club pulled off a win by one-point of the Borrego Cup. The competition lasted for three days, starting at Rams Hill Golf Club, followed by The Springs at Borrego and concluding at the De Anza Desert Club.

In a classic toe-to-toe battle of the three teams, each with 16 players, then using the best 12 scores, they were then tallied and a winner was declared. BSMGC totaled 1,106 points, Rams Hill totaled 1,105 points and De Anza with 1,098 points, using a modified stableford points system. Net scores were used, one point for a bogey, two points for a par, three points for a birdie and four points for an eagle while using a GHIN handicap.

BSMGC President Artie Aviles stated that without the superb play of Mike Miller (Oregon) and locals Pat Ellis and Rudy Squillante, the club may not have won the tournament. "Those three set the pace for our team starting at Rams Hill."

BSMGC has won the competition four times in the last eight years and is very proud to have the "Cup back where it belongs" and "we will have the beautiful trophy on display very soon at the Arches for inspection," Aviles said.

Aviles also stated, "It's been a tough battle for our team not to have their home course (Borrego Springs Resort) open for competition these last three golf seasons, but The Springs at Borrego came through for us in fine fashion, even though that day's weather was extremely cold and windy."