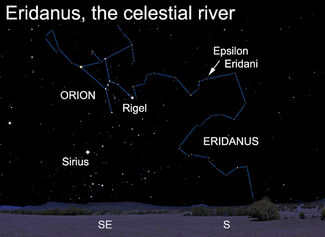 One of the sky's longest constellations is Eridanus, the river.

You can stand outside every night of the year and you won't see stars more brilliant than those of winter. Most remarkable is that during the early evening hours right now you can find three-quarters of the 50 most brilliant stars in the entire sky.

It's too bad so much of the population lives under severe light pollution, and that most people don't venture out to explore the amazing nighttime sights.

Those who love the sky, however, are a different lot. When stargazers peer skyward at dusk on cold winter evenings they find it hard to ignore Orion, the hunter, standing stoically over the southeastern horizon. Even those who just "accidentally" glance upward as they race from their cars to their nice, warm homes almost instantly notice the four bright stars that outline a rectangle and three more that trace a straight line in its center.

While Orion unquestionably represents the season's most attention-grabbing star grouping, it's not the only constellation in that area of the sky. In fact, one of the longest of all constellations begins near the foot of the great hunter. Its name is Eridanus, the river.

In Greek mythology, Eridanus is the river in which young Phaethon crashed after his failed attempt to fly the Chariot of the Sun, but no one knows exactly which river Eridanus was supposed to represent. Some claim it's the Tigris or the Euphrates, while others suggest it might be the river Po or possibly even the mighty Nile.

Next, look just above and to its right for the fainter star that marks the "head" of the celestial river. If you've got a dark, un-light polluted sky and a fairly low southern horizon you should be able to trace much of the river as it meanders to the west and south.

Because Eridanus lies so far south, stargazers in the Earth's Northern Hemisphere can see only a portion of it; if you live in middle or high latitudes you might be able to see only one-third or half of it. Those living in more southerly locations, however, will see much more. Only folks who do their stargazing near or south of the equator can see the entire constellation as it meanders almost all the way toward the south celestial pole.

Though the constellation of Eridanus is rather obscure, one of its stars has captured the imagination of astronomers and science fiction authors alike. Its name is Epsilon Eridani – a slightly orange star appearing about midway down the constellation's winding stellar string.

It was back in 1960 that scientists proposed that, because the star lies relatively nearby – only about 10.5 light years from Earth – aiming a radio telescope in its direction might detect signals from an intelligent civilization orbiting nearby. And that's exactly what astronomers did; unfortunately, they have so far received no signals of great interest.

They have not stopped their monitoring programs, however, for today we know that Epsilon Eridani has at least one Jupiter-like planet in orbit around it – and who knows how many others!