Hiking Here and There 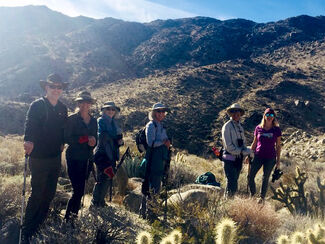 It's business as usual for Interpretive Activities in the Anza-Borrego Desert State Park. To start the 2022 New Year, Bri Puzzo led a group of enthusiastic hikers to Big Spring via Tubb Canyon. This is a 1.7 mile hike (50 minute return trip) via Montezuma Highway (S22). There is a parking area just past mm 11.5 and before 11.

Across the road and heading South, a faint trail for about 400 yards leads the way over a small saddle to the right. At the top of the saddle, the eye follows a distinct golden trail of autumn colors and surviving vegetation. The Spring survived a fire in 2012 and that's just what the desert is all about: Survival!

My favorite survivor is the Creosote bush (Larrea tridentate). It is more commonly called hediondilla; Spanish hediondo = "smelly." Prolific, independent, standing alone and happy, this bush dates back to almost 12,000 years. Certain herbal properties from the Creosote bush can be used for a myriad of health issues including aches and pains, viral and inflammatory conditions. For the believers, it has been considered a godsend and of course, argued by some.

The King Clone of the Creosote bush is thought to be in the Mojave Desert. A native to the Southwest and no matter how harsh the summers and winters may be, there stands the Creosote.

I call them "guests" of the Creosote and the area of Big Spring includes the Sugar bush, Rock Hibiscus, Apricot Mallow and tiny flowers beginning their summer bloom are Chuparosa and Brittlebush.

Waiting for the warmer weather to arrive are several healthy Desert Apricot shrubs (botanically known as Prunus fremontii). The name for this showy shrub is derived from the early American explorer John C. Fremont. It was a great delicacy for the Cahuilla people of the Coachella Valley and Mojave Desert region and surprisingly Drought tolerant.

The silence and quiet of this area is a reflection of how picture perfect and beautiful the area is for a hike (or amble) just a few miles away. The only sounds that one can hear in this original part of Anza-Borrego are the birds enjoying the unique menu of insects, berries, especially from the mistletoe. The notable birds were the forever Red-Tailed Hawks looking for prey and the Loggerhead Shrike. Occasionally the Phainopeplas do a flyover and this little fellow is easily identified by the shiny black feathers and a distinct crest, long tail and red eyes. The females are grey and less conspicuous.

The next hike with Anza-Borrego State Park is scheduled for February 8 to the Pacific Crest Trail, north of Scissors Crossing. A moderate climb for great views and like minded enthusiasts.