Sneak A Peek at the Springtime Sky 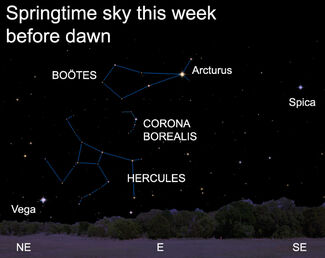 I know it's still quite cold and snowy in many locations, but every year around this time I begin to get excited about the upcoming springtime season of stargazing.

During evening hours in late January and early February, we on the Earth's night side look outward toward the stars we recognize as the "winter sky". If you'd like to get a sneak preview of the stars of spring, however, all you must do is rise before the sun and head outdoors!

Right now, one of my favorite stellar groupings shines midway up in the eastern sky during pre-dawn hours. It's named Bootes (pronounced boh-OH-teez), after the herdsman who eternally shepherds the polar stars in their daily and annual revolutions around the North Celestial Pole.

Bootes is marked by the yellowish-orange star Arcturus, the fourth brightest in all the heavens and the brightest in the northern half of the sky. Located 37 light-years away ("only" about 220 trillion miles), Arcturus is a stellar giant with a diameter 27 times that of our sun.

You can scour the area for an image of a herdsman if you like, but I think Bootes looks more like a kite, with Arcturus forming its base where a tail streams nicely off to its side, or an ice cream cone with Arcturus at its pointy end and a single scoop outlined by the stars to the left.

In the southeastern sky lies Spica, the brightest in the constellation Virgo, the maiden. Its name comes from the Latin word meaning "ear of grain" and in many depictions of the constellation the star represents a shaft of wheat.

Now appearing below Bootes you will find Hercules, the strong man – famous in ancient Greek mythology for his 12 labors.

Hercules outlines the fifth largest constellation in the sky but, because it doesn't contain any very bright stars, it's not particularly prominent. You should easily spot its central "keystone" of four stars, however. As a native son of the Keystone State (Pennsylvania), I always make sure I proudly show this figure to stargazers.

Between these two star groupings you'll be able to spot one of the prettiest (and tiniest) constellations in the springtime sky: Corona Borealis, the northern crown. Corona Borealis is an ancient constellation that symbolizes a jeweled crown, or wreath, worn by Ariadne, daughter of King Minos of Crete, when she wed Bacchus. Another story suggests that its stars represent a braid of golden twine.

Whatever the story, Corona Borealis is one of the smallest constellations in the heavens. In fact, it ranks 72nd out of 88 constellations, and its brightest star – Alphecca – isn't terribly bright at all, fainter even than Polaris, the North Star.

Finally, look low in the northeast for the rising jewel Vega, the brightest star of Lyra, the harp. Vega is one of the three bright stars of the Summer Triangle, and whenever I see this star appearing I know the magnificent summer sky and Milky Way are not far behind.

But that's a story for another time; right now, we can rise before the sun to enjoy a terrific preview of the upcoming springtime sky!