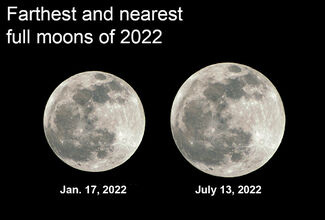 At least once a year we hear about the supermoon – when the full moon appears largest in our sky.

Why, however, do we rarely hear about the full moon appearing at its smallest? Why doesn't this make the headlines? Why don't we get inflated news reports about this?

Well, get ready. In the often-overblown style we hear on TV or read on the internet, let me offer the following. "If you stepped outdoors on the evening of Jan. 17, look skyward, you'll see a spectacular sight that few have ever seen before: the mini-moon!"

The moon does indeed change its apparent size in our sky. That's because it doesn't remain at a constant distance from us as it would if it orbited the Earth in a circular path. It travels, instead, along an elliptical path and, therefore, alters its distance – and its apparent size – throughout its monthly orbit.

Fortunately, this change is not huge because without the moon's relatively constant gravitational pull, the tides would never have made it possible for life to emerge from the seas eons ago.

On Jan. 17, the full moon will be near its farthest point from Earth and that night will appear to be the smallest full moon of 2022. The exact time of its "apogee" will occur three days earlier, but when the moon rises on the evening of Jan. 17 it will lie approximately 247,536 miles from us.

So will you actually notice that Monday's full moon appears smaller than average – a mini-moon? Perhaps, but only if you've convinced yourself in advance that it should appear smaller. Otherwise, I suspect the average stargazer will notice nothing different.

Part of the reason is that our memory of such things is not very reliable; in fact, it'll be only experienced moon watchers who might be able to detect this mere 3.5% reduction from its average size.

Now, while this is a relatively minor difference, we can easily see it by comparing two full moon photographs – one taken at apogee and another at perigee (its closest point to Earth). You can easily create such a photo comparison for yourself.

Use a camera with a long telephoto lens (300-400mm or longer will do nicely), and set your camera to manual mode (M) and ISO 200; then try 1/250 second at f/8 to start, but try some other exposures to make sure that something turns out well.

Capture one image on Jan. 17 and, using the same settings, shoot another on July 13 – the night of this year's closest full moon. By comparing these two images side-by-side, you'll discover that this month's full moon appears slightly smaller than that of July's – only about 11.3% – probably not enough for beginning sky watchers to notice easily with the unaided eye, but more than enough for your photos to show the difference.

Whether or not you can notice this small change, it should still be fun to get out after sunset on Monday to check it out!