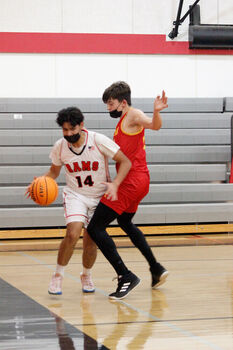 Junior Julio Medina balances his way along the line to stay in bounds.

The Rams boys' basketball team continued to fight its way for the first win of the season, after falling to Mountain Empire, 64 – 10, on Dec. 3 at home.

The two teams faced each other in an away game back in November, where they fell 53 – 12.

The Rams also went up against the Bobcats of Hamilton on Dec. 8, which took place after print.

Against the Redhawks, the Rams found themselves down early in the game.

The Redhawks began the game strong and aggressive, as they extended the lead early.

Midway through the first quarter, the Rams managed to get on the board to stop the bleeding with a free throw by junior Julio Medina, 21 – 1.

Sophomore Brody White sank in free throws of his own, and hit a shot behind the arc, but the Rams were still down, 23 – 6.

The Red Hawks stepped up their defense, holding the Rams to zero in the second and in the fourth quarter.

In the third, however, the Rams began to be more aggressive in the paint, attempting to get past the Redhawks.

Despite a score that the Rams hoped would tell a different story, the team continues to push forward and get better every game.