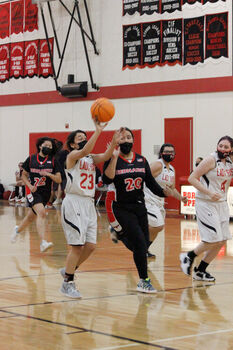 The Lady Rams basketball team avoided back-to-back losses as they earned a 25 – 12 win over the Mountain Empire Lady Redhawks on Dec. 3.

The two teams faced off in November in an away game, where the Lady Rams won 16 – 4.

The Lady Rams also faced the Hamilton Lady Bobcats on Dec. 8 at home, which took place after print.

In the game against Mountain Empire, there was much back-and-forth. The Lady Redhawks were on the board first after a steal for a layup.

However, they were answered right back with a three-pointer by freshman point guard Abigail Gonzalez to take the lead, 3 – 2.

The Lady Redhawks did not give much wiggle room for the Lady Rams, as they continued to do a full court press.

Midway through the first quarter, Mountain Empire was up 6 – 3, and that lead was cut to one after a pass from Gonzalez to senior center Joselynn Troncoso from the free throw line, 6 – 5.

At the end of the first quarter, both teams kept it close, but the Lady Redhawks led, 8 – 7.

The second quarter was mostly defense, as the only two scores came from Borrego's Troncoso and sophomore shooting guard Aleksandra Buchowiecka, 11 – 8.

In the third with 6:53 on the clock with Mountain Empire continuing their full court press, Borrego managed to get around them swiftly, as junior small forward Hannah Strate found Troncoso wide-open under the basket, 13 – 8.

Troncoso currently leads the team in points, rebounds and assists per game.

The Lady Redhawks managed to finally get on the board after a steal, 17 – 10, with 30 seconds left in the quarter.

The Lady Rams picked up right where they left off to begin the fourth quarter, as they continued to put points on the board.

Despite being guarded by two Lady Redhawks, Gonzalez drove through the paint and put up a floater, extending the Lady Rams lead.

Defense continued to step it up, and only allowed two points in the fourth quarter.

The team is working hard on all cylinders, and continues to fight to the finish. This young, strong core is aggressive, and will be a force this season.

The Lady Rams are back at home against Horizon Prep on Dec. 10, 6 p.m.