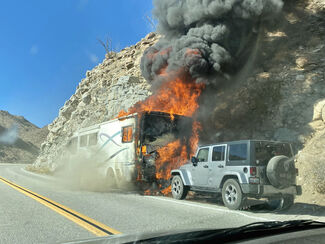 Borrego Springs Fire Protection District units and CalFire responded to a call shortly before 11 a.m. on Nov. 27 of an RV on fire near mile marker 14 on Montezuma Valley Road.

When units arrived, the RV was engulfed in flames, and it spread onto the Jeep that was latched to the rear. The owners and occupants of the RV could not remove the Jeep due to the heat coming from the fire and the dangerous possibility of an explosion occurring during that time.

Luckily the passengers of the vehicle were unharmed. The RV and Jeep fire were also close to the mountains, but it did not spread enough for a wildfire.

A few vehicles managed to go up-and-down the grade before it was closed shortly before noon. The roads reopened around 4 p.m. while crews assessed the damages.

It is unclear of what caused the fire at this time, and is still under investigation.