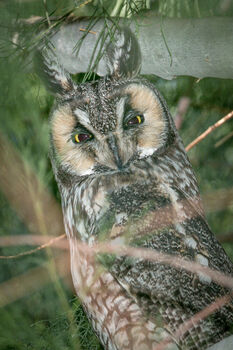 There were these two beady eyes looking down at me through the thicket of tamarisk branches.

I had inadvertently disturbed a sleeping long-eared owl who was comfortably tucked into a protective pocket in the trees at Anza-Borrego's Tamarisk Grove Campground.

Often mistaken for a great-horned owl, this desert owl is a wide-spread species, but a rare resident throughout San Diego County. Their numbers do tick up slightly in winter months when birds migrate in from colder climates.

While the great-horned owl has similar markings, it is much larger and lacks the longer and more distinct ear tufts that give the long-eared owl its name.

This is considered a medium-sized, slender owl with females being slightly larger than males and measuring about 15 inches tall with a wingspan of around three feet.

The upper parts of this owl are a mix of black, brown, gray, and tan extending down from the head to the beak. Feathers around the eyes are buff to white. The chest is barred with a pattern of buff and darker brown. Males are more muted in color.

The "ears" of the long-eared owl are actually tufted feathers that stick up about 1.5 inches from the top of the head and some believe it's an adaptation that helps camouflage the bird when roosting in heavy foliage.

This owl normally nests in trees, most frequently using an abandoned stick nest built by other birds.

While the long-eared owl prefers to roost in dense vegetation, it hunts in open areas where it preys on small rodents located at night through acute hearing.

One of their preferred food sources in the desert is the pocket mouse.

During the breeding season, you may hear these owls at night. Males have a more traditional hoot, but females have a raspy, haunting hoot that could scare you to death if you didn't know what it was.