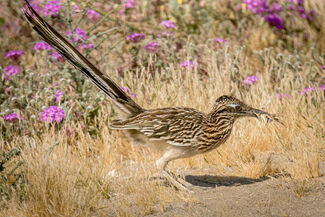 A roadrunner enjoying a grasshopper lunch is a likely subject to be recorded on iNaturalist that can help others locate these interesting animals.

It's desert season and both residents and desert visitors alike are returning to the many trails and wilderness routes that offer access to a fascinating natural world.

Hikes will often encounter plants, birds, or other animals that they don't recognize, or would like to let others know about, especially if they have stumbled across a rare species.

As the old saying goes, "there's an app for that."

This free program is called iNaturalist and it links 750,000 scientists, naturalists and interested citizens, and gives them a chance to record and share their observations.

A recent visit to iNaturalist.org reveals that just within the Borrego Valley there are nearly 20,000 observations that include 854 species logged by 931 observers.

iNaturalist is a combined effort of the California Academy of Sciences and the National Geographic Society.

It's also a great resource, allowing users to search by locations, such as Borrego Springs or Anza-Borrego Desert State Park.

Color coded map points tell the viewer if the observation is a plant, spider, insect, mammal or other species.

Do you want to know the latest sidewinder rattlesnake was spotted, or how about the local coyotes or roadrunners? The iNaturalist app will give you that information along with the date, and time.

Users are also encouraged to record their encounters with plants and animals. The more data that is posted, the more valuable the database becomes.

For more information, or to sign us as an iNaturalist user, visit iNaturalist.org.