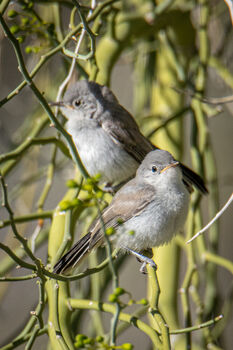 Fledgling gnatcatchers just emerging from their nest in a palo verde at the Anza-Borrego Desert State Park Visitor Center.

Like a tiny bouncing ball, the movement in the palo verde tree caught my eye.

It was a black-tailed gnatcatcher and I stopped for a moment to see where it was going.

Tucked into the thicket of green branches there was a tiny nest, and nearby perched two gnatcatcher chicks who were venturing out from their tightly-woven cup nest for the first time.

It was a beautiful desert spring morning, and I was wandering around the state park visitor center when I spotted the chicks and the attentive parent keeping an eye on her youngsters.

The black-tailed gnatcatcher is a desert bird not found in other areas of San Diego County. Here, it is a common, permanent resident that seems to thrive in the protected branches of spiny trees and shrubs such as palo verde, smoketrees, and mesquite.

Their range extends east into the deserts of Arizona, New Mexico and Texas and south into Mexico.

These are small songbirds, about males about four inches in length and females slightly smaller.

Overall, they are a dark gray color with lighter underparts and a white eye ring. Males will have a black cap in the summer.

The black-tailed gnatcatcher remains paired all year and it is not uncommon to see pairs foraging together as they search for insects. Some research suggests they mate for life.

The gnatcatcher begins nesting in March with construction of a deep cup made of plant fibers and lined with spider web, feathers, fur, or plant down. Nest measures about two inches across.

Nests are tucked deep into the protective branches of host trees, both as a protection from predators and a filter of the hot desert sun.