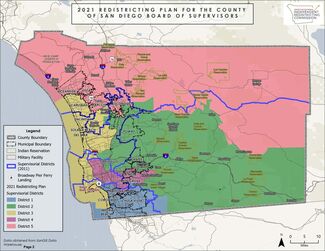 A reshuffling of San Diego County's final redistricting maps for five supervisorial districts presented at the December 9 public meeting showed that Borrego Springs had been switched from Supervisorial District 5 to District 2. The change led to a real cliffhanger, as surprised Borrego representatives rallied to get Borrego Springs back into Supervisor Jim Desmond's North County District.

Redistricting takes place every 10 years, following the federal census. District boundaries for federal, state and local elected offices are redrawn to reflect new population data and shifting populations, and are in effect until the next decade.

In San Diego County, new supervisorial districts were created by an Independent Redistricting Commission (IRC), composed of 14 individuals drawn randomly from a pool of 60 pre-qualified applicants. Meetings were held from September through December 15.

Many of the meetings were public, inviting comments in person, via zoom, phone and email. The last three public meetings, leading to final approval of the new districts on December 9, 11, and 14, were particularly intense and politically impassioned.

"Borrego Springs is one of the Supervisor's favorite constituencies. Unfortunately, we have no control over the decisions of the IRC," stated Darren Gretler, Supervisor Desmond's Chief of Staff. "Borrego is a small rural community with many unique problems. It would be a shame to change elected leaders when we have just been getting to know Borrego; making progress on a number of fronts, and have unfinished projects on the Revitalization Committee's agenda."

Elected supervisors have no control over the IRC or its recommendations. The 14 IRC Commissioners act independently of influence from the Board of Supervisors, and are tasked with balancing the five districts by equal population counts of roughly 650,000, and at the same time creating a more equitable and stronger minority representation.

Fortunately, Rebecca Falk, chair of the Borrego Springs Sponsor Group, and Jim Wilson, leader in the Christmas Circle Community Association, were at the December 9 meeting, prepared to ask the IRC to keep Borrego in San Diego County's District 5. Even with the last-minute notice of changes, and as the meeting was happening, a few other Borrego residents were able to sign in to speak virtually or send emails also requesting the Commissioners to leave the Borrego Springs planning area in District 5.

Borrego speakers explained that the community identifies with the North County, including emergency hospital services at Palomar Hospital, other unincorporated communities and Indian reservations in District 5. They also pointed out that, "Borrego Springs has many important projects underway with the guidance and support of Supervisor Desmond, who is acquainted with Borrego's unique location and environment, as well as its important geographic connection with the Anza-Borrego Desert State Park."

Speakers also noted that "Borrego's population was so small, it would not make a difference in balancing the number of people in the districts one way or the other."

There was one truth consistently expressed – "Borregans like working with, and appreciate their current supervisor."

The meeting, which lasted until midnight, as well as final voting by Commissioners, was held captive for hours by clashes between an emotionally-charged, large, organized group of East County Chaldeans, and their supporters and opponents, voicing diverse sentiments regarding changes in the District 2 voting boundaries. The Iraqi Christians, a self-described "community of interest" reside in El Cajon, Spring Valley and Rancho San Diego.

"By breaking up this coalition of Iraqi voters," the Chaldean speakers asserted, "They would lose significant political power of self-governance in both the City of El Cajon and the adjacent unincorporated areas."

Speakers accused the "IRC of prejudice, playing politics and purposefully trying to silence the religious voice of the 50,000 Chaldean Christians." Many of El Cajon's other residents also opposed moving the historical East County City into District 4, where it would be assimilated into Hillcrest, Clairemont and North Park.

The good news for Borrego Springs, despite the fact that final decisions moved too quickly to rally the entire community as Commissioners rushed to reach the December 15 deadline, the voices of the small number of Borrego residents, representing the community, were heard.

The approved new map was then dispatched to the Clerk of the Board of Supervisors, and the reorganization became immediately effective. Along with the modified geographic boundaries, there will be other surprises for voters. One for many, will be waking up, to find new supervisorial representation, possibly someone with a different party affiliation and political ideology.

The first ever minority district was also carved out in the South Bay, with a 58.2 percent majority of Latino voters, represented in District 1. As a result of the redistricting, District 5 now has a resident population of 689,991, 29,539, over the ideal, and covers 2,186 square miles. East County's District 2, the only other district with a large track of unincorporated land, has 660,452 residents and spreads 1,507 square miles.