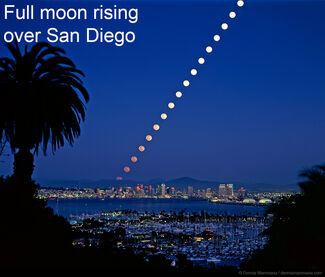 Few things in nature are more stunning to watch than an immense and orange full moon rising over the horizon. View this amazing sight just once and you'll surely ask the same question as every other moon gazer: "Why does the moon appear so large and red when it's rising?"

A simple question; unfortunately, the answer is not so simple.

First off, the moon's orange color originates from the atmosphere around us. This dust-filled air scatters the bluish light from the moon's spectrum and leaves only warmer colors such as yellow, orange and red to shine through. The more particulate matter (such as dust, smog or volcanic ash) in the air, the redder the moon will appear.

The seemingly immense size of the rising moon, however, is another matter altogether. Many believe the atmosphere acts like a lens and magnifies the moon's appearance, but this is just as wrong now as it was when Ptolemy suggested it 20 centuries ago.

This striking phenomenon is known as the "moon illusion" and is created not by the moon or atmosphere but occurs because our brains are fooled by the terrain over which the moon appears.

To demonstrate this for yourself, make a loose fist and hold it up to your eye and look at the rising (large) moon through it, using your fist to block out all but the moon itself. The moon will appear to shrink. For an even more startling demonstration, blink your eyes back and forth, looking through – and then around – your loose fist, and watch as the moon grows and shrinks.

I think you'll agree that it's quite a powerful effect, but why do we see the illusion, but a camera doesn't? It may have to do with the conditioning our brains have experienced from the time that humans began their time on Earth.

Try the experiments above to remove the horizon from view and the brain is no longer confused.

If this concept makes your head spin, you're not alone. Scientists have been debating this for centuries. Look up the "Ponzo illusion" online, and you'll see a similar illusion involving railroad tracks.

Whatever the actual cause of the moon illusion, the rising full moon never disappoints, and Saturday, Dec. 18 will be no exception. To see it at its best, remember that the full moon rises around the same time – and in the opposite direction – as the sun sets. That means that on that day you can watch the full moon rise over the northeastern landscape during dusk.

If you have a low horizon and a clear sky, you'll definitely be amazed!