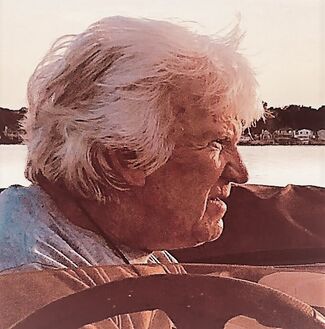 David Michael Stang, age 79, passed away on October 14, 2021 at his beloved Lake George, MI home when his 10-year hard-fought battle against Parkinson's, the fastest growing neurological disease in the world, came to an end.

Dave was born in Fort Wayne, IN on November 28, 1941 to Howard and Mary (Miner) Stang. A graduate of Central Catholic High School, he received his B.S. degree in biology from Purdue University in 1964. That summer, he married Joann (Culler) Stang. They celebrated 57 years of marriage on August 1.

Dave worked for 15 years as a chemist in tire manufacturing, giving him and Joann opportunities to live for extended periods in Iran and Chile; creating lifelong friendships and providing opportunities to expand his world view. He relocated to San Diego in 1979 where he owned and worked in a wide variety of small businesses from precious metal casting to document duplication for legal firms. He then joined a partner from Australia and founded Dryacide USA, to produce and distribute a safe insecticide for agricultural applications.

Home was wherever Dave was – Fort Wayne, Tehran, Iran for almost six years, Chile, San Diego and Lake George. For the last 19 years he and Joann spent summers at Lake George and winters in San Diego. He was a devout "laker", developing a love of the northeastern Indiana lakes as a teenager with his cousins such that the first property he and Joann purchased was their little Lake George cottage which they then renovated and lived in during retirement. They enjoyed boating of all types, creating lasting memories and sharing those often hilarious stories with friends.

Dave made service to others a central part of his life. He was a founder of an organization in Borrego Springs, CA, BASIC, that taught young folks to fly airplanes, and then broadened it to support education for all residents of that community. He served for many years as President of the Lake George Cottagers Association, devoting hours to strategy sessions, meetings and communications to develop a plan for the maintenance of the dam. With friends he founded the Lake George Sailing Club to introduce kids to the joy of sailing. As a pilot and leader of the Flying Samaritans, he flew many dentists and health professionals to Baja California, Mexico on missions to provide health care to those less fortunate. He was an early user of computers, owning one of the first 17 IBM PCs available in San Diego, and a founder of local user groups to share and teach knowledge. He researched his disease tirelessly, never being afraid to try any and all conventional and alternative treatments to prolong his quality of life for as long as possible and shared what he learned with others including introducing Parkinson's groups to the Rock Steady Boxing program.

Dave was curious about the broader world and had an abundance of gifts – funny, quick witted, smart, mischievous and kind are only just a few. He loved flying, traveling, music, wood working, technology and building and fixing. He could fix anything and everything, but it was always done Dave's way. His garage contains more "stuff" than a hardware store. Dave traveled the world; curious about its people and their customs. Dave shall live on through the many who came in touch with him and enjoyed his company, care and the love he so generously offered to others.

Dave is survived by his wife Joann; his sisters Sally Yong of Hawaii and Kentucky and Judy Dorsa of California; nieces and nephews and great-nieces and nephews; his "adopted" family in Chile; tolerant caregivers Brooke and Angie and many friends he made throughout his lifetime.