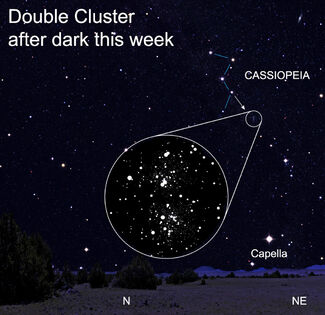 One autumn night in 1971 while I was a junior in college, I hosted a small group in our observatory to view the wonders of the heavens. Shortly after beginning, we smelled smoke, not uncommon during chilly November nights in central Ohio as fireplaces were active all over the county. But this was different; this smelled like a burning building.

After some investigation, I found in the lab just below the observatory workers frantically fighting an electrical fire in their ceiling, and they were not winning. So I raced upstairs, gathered our group, turned off the power and shut the dome, grabbed a few eyepieces and the observatory logbook and led everyone down five flights of stairs to the street.

It was on that night that we lost our observatory, but I'll never forget the last view we had through its superb telescope. It was the Double Cluster of Perseus.

The Double Cluster and I shared a horrific experience that night, and every year on Nov. 16, I step outside to say hi to my old celestial friend. And this month, exactly 50 years later, I will do so again.

This week, before moonlight becomes too bright, try to find it for yourself. First, locate Cassiopeia, the queen. You can search for celestial royalty if you like, but you'll have more luck tracing the letter "W" outlined by its five brightest stars standing sideways in the northeast after dark. Simply follow its two nearly vertical stars downward and extend that line by twice their separation.

Look carefully and you may spot this object with your own eyes as a faint smudge of light but aim binoculars or a small telescope in its direction and you may think you're seeing double. That's because you are.

Modern astronomers identify this sight it as "h and chi Persei", as well as by the catalog numbers NGC 869 and NGC 884. Most of us, however, know it simply as the Double Cluster of Perseus. The easternmost cluster of the pair (NGC 884) is slightly larger but contains fewer stars – about 150 or so – while NGC 869 is physically smaller and contains about 200 stars.

At a distance of some 7,000 to 7,500 light years, these star clusters lie within only a few hundred light years of each other – pretty close by cosmic standards. They also seem to be relatively young – most likely less than 13 million years old – and travel together through the galaxy tethered by gravitation.

What a stunning sight we had on that night in 1971 as we peered at this ancient light the magnificent 16-inch telescope showed us during its final minutes of life – a sight I shall never forget.

A few decades later, my astronomy professor and his wife visited me in San Diego, and while enjoying a terrific meal of pasta and vino I said to him, "You know, Phil, of all the students you've had over the decades I'm amazed that you still remember me."

Having spent four years under his tutelage, I should never have been surprised by his hilarious response. "Not remember you. You burned down my observatory. How could I forget you!"