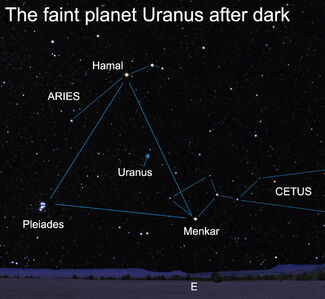 Many years ago, I was interviewed by a couple of morning radio jokesters in San Diego. Knowing what these guys were like, I was prepared for their silliness and had planned a few good comebacks.

Well, to my surprise they played it completely straight – not even one humorous remark between the two of them. I was actually rather disappointed in them.

The few minutes flew by quickly and as the interview was about to end, they had just one final question for me. And it was this: "Do you astronomers still giggle when you say the name of the planet Uranus?"

At that moment, my faith in humanity had been restored; all was well again with the cosmos!

Uranus is, without a doubt, the most mispronounced planet in the English language and almost always gets a chuckle out of kids (and AM radio guys). It was discovered by William Herschel in 1781 and named Uranus in honor of Ouranos, the father of the Titans and grandfather of Jupiter in Greek mythology. Of course, you can pronounce it any way you like, but it was then (and still is) pronounced YOU-rah-nus.

At the time, Herschel's discovery created quite a stir since, throughout history, only five planets had been known to exist: Mercury, Venus, Mars, Jupiter and Saturn (and, of course, the Earth), all of which are easy to see with the unaided eye.

Uranus is different, however. Though it's extremely faint, we can always see it with binoculars and sometimes even with the unaided eye. Though the ancient sky watchers didn't have binoculars, I've often wondered if they ever spotted this object but just considered it not important enough to record its existence.

Right now, Uranus lies at its closest to Earth – its opposition point – and is just barely bright enough to see with the eye under extremely dark skies. There's good news and bad news, however, and they're both the same. The planet appears in a section of the sky with few bright stars to serve as guideposts, so that means that Uranus – as faint as it is – is one of the brightest objects in that celestial region.

After dark, see if you can spot it almost midway on a line between the stars Menkar (in Cetus) and Hamal (in Aries). Try searching for the planet with just your eyes before resorting to binoculars. It's quite faint, but you might just be able to find it! You can even use the Pleiades star cluster lower in the sky to help define a triangle that may help you track down this elusive planet.

Now if Uranus had been known in ancient days, one must wonder how history might have evolved. After all, the five visible planets (plus the sun and moon) lent importance to the number "seven," and we see it everywhere: There are seven days of the week, seven rungs of perfection, seven wonders, seven emblems of the Buddha, seven gates of Thebes and on and on.

How might our culture be different had we known of eight significant bodies that traveled the heavens? It's only by chance that we didn't.