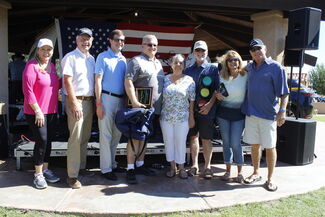 The 2021 55th Annual Borrego Days Desert Festival was a success, and the well-deserved reputation of our wonderful community where volunteerism thrives remains intact. Indeed, the theme "Welcome Back" was a fitting one this year.

Under the leadership of Chamber of Commerce Executive Director Françoise Rhodes, taking charge of Borrego Days for the first time in her tenure as Director, and backed by the number of volunteers, who made sure that the highly anticipated Festival lived up to the excitement.

Back in August 2020, the Chamber of Commerce Board unanimously decided to cancel the 2020 Borrego Days Desert Festival, citing concerns regarding the health and safety of the community, volunteers, visitors and the overall impact on Borrego Springs. This was during the height of the coronavirus pandemic and the uncertainty of what could or would happen. It was not the easiest decision to make, but the health of everyone came first.

Through the struggles of preparing for the event, it was a pleasure to see all those in attendance enjoying the weekend of fun, laughter and the outdoors in the heart of Borrego Springs on Oct. 23 and 24.

It was a hard decision not to have the parade this year, but as Rhodes previously noted, it was the right thing to do. The parade will return in 2022, with entrants already signed up.

Despite the scaled down version with no parade that could possibly have affected the number of visitors this year, the attendance was at least 5,000 people. It did seem lower than other years, especially on Sunday, but it did not detract from the fun.

"Barring the many challenges faced for this Borrego Days Desert Festival and a few unexpected glitches (there always is) I feel the 55th Annual Borrego Days Desert Festival was enjoyed by all," Chamber Executive Director Françoise Rhodes said. "I have so much to say and many people to thank in the next issue of the Borrego Sun, however right now all involved deserve a much needed rest."

Opening the start of the Borrego Days weekend, the Borrego Springs Fire Protection District led the way down Palm Canyon Drive to ring-in the Festival at Christmas Circle, followed by the American Legion Post 853 and "The Beast," its well-oiled 1944 Scout Car and Miss Borrego 2021 and her court.

The singing of the National Anthem followed, and was beautifully sung by Borrego's very own Jackette Williams.

After much anticipation, it was announced that unfortunately, there would be no flyover due to the poor weather at Gillespie Field in El Cajon, where several of the planes were coming from.

Despite the absence of these two events that many usually look forward to, fun was had at Christmas Circle, and it surely did not disappoint. Many patrons at the Festival enjoyed it scaled down and appreciated it was more local.

Many vendors – some new, some returnees – music, kids zone, beer garden and the "Show & Shine" car show were enjoyed by locals and visitors. There was a variety of delicious food choices, from philly cheesesteaks, corn on the cob with butter to ice cream and shaved ice, it sure was a tasty treat. However, there were a few comments made of the lack of diversity with the food options with unnamed persons complaining for the lack of hamburgers or hot dogs, saying their suggestions fell on deaf ears.

The first local Talent Show was had and was a hit among folks. Kids enjoyed the bouncy houses and slides, the adult beer garden was hopping with people consuming large quantities of beer. Local booths like the Borrego Art Institute and the Candlewood Art Festival gave away free pumpkins and art kits, fun was had by one and all.

For those early shoppers getting ahead of the holiday rush, all the while supporting the local businesses, there were interesting artworks, handmade jewelry and clothing to choose from.

During the announcements at noon, Rhodes welcomed all in attendance to the annual Festival, welcoming everyone back to Borrego Springs. No awards were given out this year, and some hope it will be brought back when the parade also returns.

Supervisor Desmond, Hayes and President of the Chamber of Commerce Clint Brandin honored outgoing Honorary Mayor Andy Macuga, and thanked him for his contributions to the community, stating that as a representative of Borrego Springs, he was always willing to lend a hand and make sure this community was united.

Co-Honorary Mayors Jim and Anne Wermers were also introduced, and the trusty stoplight was seen once again, and their sole job, besides being ambassadors of Borrego Springs, is making sure that that is the only stoplight the town of Borrego will ever see.

Carol Brandin was also recognized by Rhodes with a personalized "Superstar" award for her dedication to the Festival and being the right-hand to everything that was needed. Rhodes noted that without her help, all of this would not be possible.

Despite the obvious absences of certain things, the Borrego Days Desert Festival was nothing short of a roaring success as in previous years, and was enjoyed by all. Even with a few issues, the enthusiasm was still there. Three claps to the all-volunteer force for another great year.