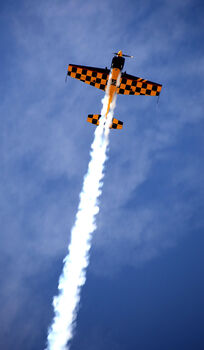 In addition to the sheer spectacle of it all, three things that Borregans have come to expect in the yearly aerobatics championships are 1) the competitors will bring their A-Games; 2) their minds will be laser-focused on their maneuvers and transitions; and 3) Jim Bourke will walk away with top honors in the Unlimited category, the highest expertise level.

The four-minute aerobatic display on the afternoon of Oct. 22 for the annual IAC Hammerhead Akrofest competition, treated dozens of spectators to a flurry of smoke-filled spins and climbs and dives by Jim Bourke, A.J. Wilder, and Rory Moore (all in their Extra 330 aircraft models – 350 horsepower and rated up to 20 G's positive and negative), Bourke lived up to expectations by outscoring Rory Moore by over 400 points, with a 90% score for execution, to Moore's 78% and A.J. Wilder's 77%.

But then something happened the next day that was unexpected. A.J. Wilder scored eight-points higher than Bourke in the "Free" portion of the three "Classic" competition categories – the other two being the "Known" (plenty of time to plan the maneuvers and transitions), and the "Unknown" maneuvers (only 24-hours to memorize the sequence and transitions).

And then, in the Known category, Wilder scored nine-points higher than Bourke, taking an overall lead of over 100 points, with their execution percentages almost identical. And finally, in the "Unknown" category, Wilder scored 11 points higher than Bourke, fulfilling a category sweep for Wilder, the first time he's done that against Bourke. Jim Bourke definitely brought his A-Game, but A.J. Wilder apparently brought his A+ precision flying game this time around. Wilder ended up with 200 points more than Bourke overall, a very thin margin indeed.

One would think that a bit of chest-thumping by Wilder would be in order, but that's not his style. Sure, he gave a quick summary of the need for good positioning in the air, the need for an agile plane, and that it's all about precision...blah, blah, blah... but what he really wanted to talk about was his "Figure-1 Foundation," a 501(c)3 nonprofit organization (Figure1foundation.com) he runs with co-founder Chris Olmstead. He immediately diverted the conversation away from his victory to the $150K/year doled out in scholarships to kids and adults who have the urge to fly. Their first scholarship awardee, Chase Standage, is now a commercial pilot!

With opportunities ranging from obtaining a fixed wing private pilot's license to "upset recovery" training during an in-flight emergency, the foundation is a good place for any pilot (with a current license) to explore an otherwise flat Earth's 3rd dimension. Details also available on their Facebook page.

And now to Jim Bourke. I found him sitting alone on a chair next to his plane, lost in thought, after the last section in the competition, the Unknown. On the outside he was all smiles, but there was a certain fire in his eyes. Asked how he felt about his performances, Bourke replied, "I did my best, but A.J. did just a little better." He was in a congratulatory mood that Wilder had finally beaten him for the first time in all three "classic" categories, but that fire in his eyes and a slightly intense voice spoke of what's in store for their next competition. "I don't like to lose!" 'nuff said.

And rounding off the top pilots in the competition is Rory Moore, 74 years young, and boy oh boy does he love torque! He's as fit an athlete as one could find out on the tarmac, and when he speaks of the absolute need for focus and concentration, it comes alive. Moore doesn't even look at his instrument gauges during flight because with so many hours in the seat of his Extra 330, it's all about the feel.

"I like to have folks think I'm out of control up there," he says, and we all thought that, when in reality it couldn't be further from the truth. While Moore sticks to the boundaries of his high-speed maneuvers, he still finds room to "make adjustments" now and then, depending on flying conditions. And wind aloft was one of those conditions he had to deal with. On the ground, he likens his plane to a Formula-1 race car – powerful, highly maneuverable, and even for one person, very cramped. In other words, not to be casually flown around for the fun of it, with other airplanes fulfilling that luxury.

And there you have a snapshot of three of the gutsiest pilots who take to the skies every so often to hone their skills and wow an audience. The next World Championships will be held in Poland next August, and we certainly welcome them back (and others who couldn't make it due to COVID-related restrictions). We look forward to the full contingent of top aerobatic aviators to fill our skies again soon.