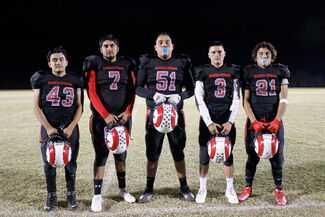 The Borrego Springs Rams football team hoped to bounce back from their loss against top-league opponent San Pasqual, and earn a win on senior night.

"I'm sad for my seniors. I really wanted to go out on a great note for them. They're (St. Joseph) a well-disciplined, well-oiled machine, and it showed. I think that we were in the right position, but unfortunately it felt like we were just running past the ball to tackle somebody that didn't have it," head coach Tim White said. "I think that there's a lot to learn from a loss like this and a lot to gain. I loved our fighting spirit, the kids never give up, ever. This is something I love about our kids in Borrego. I'm hoping that next year we come in better shape into football so we're not hoping football gets into shape, that we can focus on the game and be as disciplined and as sharp as St. Joe's was tonight, and hopefully be on the winning end of the contest for next year."

The team traveled to Victory Christian Academy on Oct. 22 for their last game of the season, and lost, 69 – 6.

The team finished the season 1 -4 in Citrus League play and in fifth place, and 1 – 7 overall.

The Crusaders chipped away on their drives, with a strong run game to gain yardage toward the end zone. With this, they were on the board first midway through the quarter. The two-point conversion was no good, and led, 6 – 0.

It was the Rams turn to answer back. However, the Rams were stopped, and the Crusaders forced the fumble, who later turned it into a touchdown. Their attempt at a two-point conversion was no good once again, 12 – 0.

The Rams hoped to turn it around in the second quarter, but picking up where they left off, the Crusaders were on the board once again, and their two-point conversion was good, 20 – 0.

After a short on-side kick, the Rams had decent field position, starting on their own 47-yard line. Senior running back and defensive back Even Padilla broke through tackles, and with nice blocking, made it all the way to the 8-yard line in Crusader territory.

With 9:27 on the clock, sophomore quarterback and defensive lineman Brody White scrambled through the pocket and found sophomore wide receiver and linebacker Pedro Rodriguez open to get the Rams on the board. The extra-point was good, but the Rams trailed, 20 – 7.

The Crusaders continued to dominate the field with their run game, proving too much for the Rams. They scored once again, and broke the game open.

After deferring to start the game, the Rams began the second half with the ball, but flags pushed the Rams back. And with a fumble call, the Crusaders got the ball and capitalize it with a touchdown. The Rams continued to do their best to push the ball and get back into the game.

After a quarterback change to senior Cesar Ochoa due to an injury from Brody White, the Rams continued to gain some yardage.

Ochoa led the team in rushing, passing and total yards per game with 74, 60, and 137 yards, respectively.

On a kickoff return, Padilla made it to the Crusaders' 40-yard line. Senior tight end and defensive lineman Daniel Arias had a good drive through the middle, pushing forward.

The Rams could not come back and get past the dominance of the Crusaders, as they fell short. Despite the scoreboard reflecting a score not necessarily wanted by the Rams, it does not take away from their efforts and hardwork.

The Rams have a young core, and will make the upcoming seasons exciting. With the loss of the seniors, it will be hard to replace, White noted.

"They're truly the only ones that came into the season with any football experience because we had to take a year off, whereas other teams got to play, so it's going to be tough. It's tough to replace seniors anyhow, but when they're the backbone of the team," he said. "It's gonna be tough. It's hard to lose seniors, but this class of seniors, it's gonna be even that much harder."

White added a few words about his seniors to close:

"A kid like Even (Padilla), who is just a warrior and has been playing hurt and injured all year long."

"Daniel (Arias) who gives everything he's got out there. Moses, I'm so proud of what he was able to do tonight."

"Bryan (Fuerte) who is just a great kid, who just suffered a big loss, went out there played for his family member who just passed away."

"Cesar (Ochoa) willing to go from quarterback to running back, that made us better, until our quarterback got hurt and he didn't even hesitate, and went right back in there as quarterback."