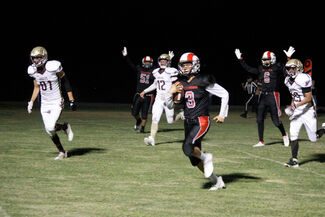 Senior quarterback and linebacker Cesar Ochoa breaks his way through the Julian line for the touchdown, with his friends cheering him on in the foreground.

Oh what a game it was. It was as intense as any rival game could be, and it did not disappoint. Even better, the Borrego Springs Rams football team conquered.

After a two-week hiatus, the Rams were back at home to face the Julian Eagles in their first Citrus League game of the season.

The stakes were surely high in anticipation of this battle, and the Rams got the job done.

The score was close to begin the game, but the Rams easily adjusted to run away with the lead. It was slightly chippy to say the least, but the Rams got the last laugh, with a 60 – 31 lead.

"Finally. We have a good team. We played some really good teams to open up and suffered some major injuries. We got some kids back tonight and that helped," head coach Tim White said.

"Super proud of the kids. They executed the game plan. We didn't mean to make it so close by fumbling the ball every time we were about to go into the end zone for a touchdown, but it made for an exciting first half. I think it lit their fire for the second half to get us over the top and get that big dub."

After a rough start for the Rams, they still were able to get on the board, as the defense managed to recover a safety, 2 – 0.

However, it seemed things were not able to click for the Rams offense, and the defense continued to put in lots of work.

With 3:40 left in the first, Julian had a huge run for a touchdown. The extra-point was blocked, but the Eagles led, 6 –2.

The Rams then had a chance to answer right back.

Ochoa then kept it, outrunning many players, to the 15-yard line.

With less than two minutes to go, Ochoa found Arias again for the touchdown. The Rams went for the two-point conversion, and it was good, as Ochoa trucked players in the process. The Rams led 10 – 6.

The Eagles answered right back and so did the Rams, as both teams kept the game unbelievably close. But the Rams held onto a 16 – 14 lead going into the second quarter.

The Eagles had a lengthy possession to begin the second quarter as they began to chip away, moving down field. However, they were unable to convert anything into a score.

The Rams did the same, hoping to find the end zone again.

Midway through the quarter, Ochoa with the quarterback keeper found himself just short of the end zone at the two-yard line. But on the next play, a hitch to Arias, and a two-point conversion ran in by sophomore running back and linebacker Francisco Garcia put the Rams up 24 – 14.

The Eagles made a huge play to get right back into it, after a kickoff return was turned into a touchdown. And with a two-point conversion of their own, were only down two, 24 – 22.

The Rams answered back with a touchdown, and the Eagles hit a field goal to end the first half. The Rams still led, 32 – 25.

Borrego hoped to continue with the momentum on their side for the second half.

Julian received the opening kickoff for the second half, but a minute in, the Rams had the ball back, after an interception by sophomore linebacker and wide receiver Pedro Rodriguez.

Garcia turned on the wheels for yet another big run, and managed to get down to the one-yard line.

The Rams cashed that turnover and big run into a touchdown, and with another good two-point conversion, the Rams extended their lead 40 – 25.

The Eagles did not lose hope and hoped to answer right back.

After a huge run that looked like it could have been a touchdown, it was luckily stopped by sophomore defensive back and wide receiver Wesley Sexton who did not stop chasing after him.

In seemed the momentum was going to shift in favor of the Eagles, but a costly mistake was in store.

A pass that looked like it could find its way toward an open receiver in the end zone was intercepted by Ochoa.

The Rams once again found the end zone, and another two-point conversion, 48 – 25 they led with about seven minutes to go.

With less than two minutes to go in the third quarter, Sexton made a big leaping interception, continuing to ignite the Rams sideline, and the Eagles did not seem happy.

Picking up right where they left off, the Rams brought their game in the fourth quarter.

Despite the interception, the Rams were unable to convert anything.

With 10:15 on the clock, senior linebacker and running back Bryan Fuerte recovered a Julian fumble, and a pass from Ochoa to Arias for the touchdown pushed the Rams lead even further. The extra point was no good, but the Rams led, 54 – 25.

Junior running back and linebacker Julio Medina joined in on the fun with a touchdown of his own. Again, the extra point was no good, but the Rams had a solid 60 – 25 lead.

The Eagles managed to put another touchdown on the board with a minute to go in the fourth, and that's all they would get, as the Rams sealed the 60 – 31 win against the crosstown rivals and get the league win.

Despite the hiccups in the beginning of the game for the Rams, it is nothing that can't be ironed out as the season continues. They sure do have a solid team that is worth watching.

As they continue their season and league battles, White knows they'll be in for some challenges.

"It's gonna get exponentially harder each week and so we want to try and build off this win, stay healthy and be able to go out and compete against Warner," he said.

The Rams look to keep their momentum going as they gear up to face Warner Springs Oct. 1, 7 p.m. in their homecoming game and the anticipated "Battle of the Springs."

"They're going to be a good team coming here just like Julian, crosstown rivalry. They're going to come here and try to spoil our homecoming and take back the "Battle of Springs" trophy that we've had for quite some time, and I'm not ready to give it back to them," White said.

The following week, the Rams will travel to face San Pasqual Academy on Oct. 8, and hope to redeem their loss from week three. Kickoff is scheduled for 3:30 p.m.