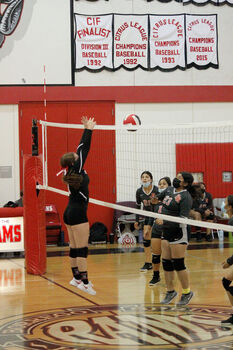 Senior Brianna Del Bono comes up with the big block at the net in the first set.

The Lady Rams were back at home to face Desert Mirage in a non-league match-up on Sept. 23.

The last time these two teams met was back on Sept. 2 when Desert Mirage snapped the Lady Rams' win streak, handing them their first loss of the season.

The team hoped to carry the momentum from their first Southern Manzanita League win against Warner Springs.

The Lady Rams also participated in a tournament held at Hamilton High School in Anza, where they finished 1 – 5.

The Lady Rams are currently 1 – 0 in Manzanita League play, and 9 – 8 overall on the season.

To begin the first set against Desert Mirage, the Lady Rams were on the board first, but was quickly answered back.

With much back-and-forth by both teams who aggressively exchanged rallies, the game remained close. However, the Lady Rams found a way to slowly extend a lead, and keep it.

Junior Jimena Ochoa led the way with a kill from the left to break the tie, as the Lady Rams led, 9 – 8.

The Lady Rams were up 16 – 8, when Desert Mirage got a kill to stop the streak.

However, the Lady Rams were back at it, pushing forward. Desert Mirage would not go down without a fight, and chipped away, capitalizing on errors and miscues.

But with a tip by senior Angelina Sanchez, who was as excited as anyone could be at the net, the Lady Rams sealed the win in the first set.

The intensity carried on over to the second set.

The Lady Rams were on the board first once again, hoping to get the same outcome as the first.

However, the lead was not safe, as Desert Mirage began to chip away, and found themselves with the lead. It continued to be an intense game, as Borrego kept fighting to keep it close.

As Desert Mirage pulled ahead, it was too much for the Lady Rams to overcome, as they lost the second set, 25 – 15, and it was clear the momentum had shifted.

The third set again remained close as both teams continued to fight.

With back-to-back aces by Lupita Arias, the Lady Rams took the lead for the first time in the set, 15 – 14.

As both teams went back-and-forth, Desert Mirage were on the winning end, taking the third set, 25 – 21.

The intensity continued into the fourth set.

The momentum was taken back by Desert Mirage who took advantage of more miscues, and finding open spots to kill the ball, no chance for the Lady Rams.

Despite attempting to fight back, Desert Mirage had the upper hand and sealed the fourth set, as well as the game win.

It was not the outcome the Lady Rams had expected after a solid first set start, but with the intensity the team had, they have the potential to continue strong as the season progresses.

As with any game, win-or-lose, the team has a few things to work on, but will surely be a force throughout the season.

The Lady Rams will travel to face crosstown rivals the Julian Lady Eagles in a league match-up on Oct. 5, 3:30 p.m. They will then return home to face Warner Springs Oct. 7, 5 p.m.