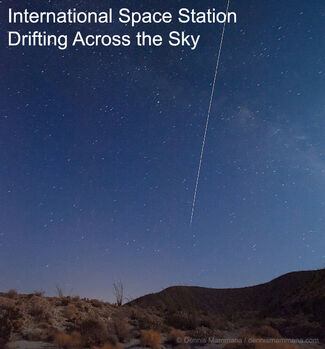 Baby boomers may recall the first days of spaceflight. It was an exciting time to be a child.

From time to time, my father would step into the backyard for an evening smoke, and I would often accompany him to gaze into the starry heavens and wonder.

It was on one of those nights in August of 1960 that my dad told me we would see a satellite named Echo that was carrying President Eisenhower's voice. As a 9-year-old boy, I imagined watching the satellite pass overhead while hearing Ike's voice booming from the heavens. I never heard a thing, of course, but on that night, I did see my first satellite. And what a thrill that was!

Today, we can easily see dozens of Earth-orbiting satellites and watching them has become one of my favorite evening activities.

How does one know when and where to look? With the internet and smartphones, it's quite easy. While you can find many apps available that provide times and paths of bright satellites, my favorite website for predicting satellite passes is heavens-above.com.

Once there, take a few minutes to register. It's free, and it'll make your future visits more productive and enjoyable. Not only will you learn which satellites are passing over your neighborhood, but you'll also find times of sunset, sunrise and twilight, phases of the moon, and much more.

To use these features, you must first tell the program where you're located – either by selecting your town from its massive database, or for even more precision, by entering your latitude and longitude manually.

Once you do this, you can easily learn the details of upcoming satellite passes. My favorite feature appears from clicking the time of a satellite's maximum altitude: a full sky map that shows a satellite's path across the familiar constellation outlines.

Now let's say, for example, that you discover that the International Space Station or the Hubble Space Telescope will be making a bright pass tonight and you'd like to see it.

First, make sure your clock is set to the correct time. Next, go outdoors a few minutes early and keep watch along the satellite's projected path for a "star" that appears to be drifting slowly in the correct direction. Don't be fooled by one with blinking red and green lights: this is not a satellite!

You can easily photograph an Earth-orbiting satellite, too. With your camera on a sturdy tripod, aim it toward one of the constellations along the satellite's path. Focus on infinity, set your aperture wide open, your ISO to 400 or 800 or higher and your exposure for "manual". Be sure to try some test exposures just before the satellite appears so you can adjust your settings, especially with bright moonlight this week.

When the satellite approaches your target, trip the shutter until the satellite has passed completely. It will record as a streak crossing the stars, which may also appear as streaks depending on the length of your exposure.

It's such great fun to watch satellites pass overhead and even more fun to know which ones you're seeing. My dad would be thoroughly amazed!