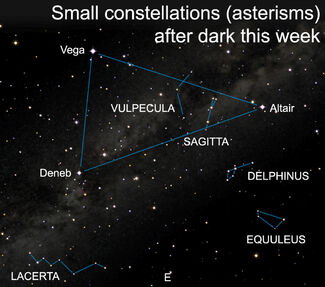 Small constellations (asterisms) after dark the week of Oct. 3.

Unlike people, who the U.S. Constitution declares as "being created equal," constellations are most certainly not. In fact, constellations aren't even visible. They are simply regions of the sky that were important to the ancients' storytelling. What we see or create as patterns among the stars are known as "asterisms," and there are some tiny ones visible at this time of year.

Head outdoors after dark and look overhead. There you'll spot the grand asterism known as the Summer Triangle, outlined by the three bright stars Deneb, Vega and Altair. Nearby, however, you'll find a few smaller constellations that are often overshadowed by the fame of the Triangle. These include Delphinus, Equuleus, Lacerta, Sagitta and Vulpecula – most of which you've probably never heard of. So maybe it's time to check out these faint and often ignored celestial gems.

Since many of these stars and star groupings are tough to find under even dark, rural skies, the best time to search was on the week of Oct. 4 before bright moonlight returns early the week of Oct. 11.

Let's begin with Delphinus, the dolphin, just to the east of the Triangle – perhaps the easiest of the bunch to spot. This group of five stars probably originated in ancient Greece and, amazingly, looks like a tiny dolphin leaping from the water.

When Poseidon, the god of the sea, wanted to marry Amphitrite, she became so disgusted at the thought of living underwater that she fled to the distant Atlas Mountains. Poseidon sent several messengers after her in hopes that she might return to him; it was only the Delphinus who succeeded, and it was rewarded with a place in the heavens.

Just to the east of the dolphin lies another beloved animal: Equuleus, the little horse. These stars form an ancient group whose origins are lost in history. The first-century astronomer Claudius Ptolemy mentioned this constellation in his great book "Almagest," but since Ptolemy borrowed much of his material from earlier writers, one must wonder if Equuleus might have actually been created by the Greek astronomer Hipparchus three centuries earlier. The second tiniest constellation in the heavens – and one of the faintest – Equuleus is tough to see under even the darkest of conditions.

On the western side of Delphinus lies Sagitta, identified as a stray arrow shot by Apollo to kill the Cyclops or even as one of Cupid's arrows; interestingly, its name comes from ancient Hebrew, Armenian and Arabic, and in all these languages, means "arrow." This is the smallest of all the constellations in the sky and has no stars bright enough to see easily from under city or suburban lights.

One of these is Lacerta, the lizard. Hevelius created this star grouping to enclose the stars of such a tiny area of the sky where no other constellation would fit.