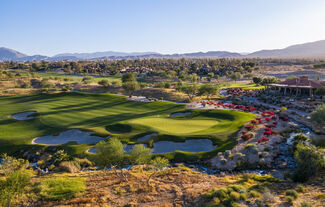 Golf Digest magazine, the Gold Standard in the golfing world, has named Rams Hill Golf Club in the 2020 – 21 list of 100 Top Public Golf Courses, citing the Borrego Springs course as, "The Ultimate Comeback."

"It's a real honor, and especially rewarding since my marketing priority was to be in the Top 100," stated General Manager and Chief Operating Officer Harry Turner, who came to Rams Hill in 2017.

"I had been aware of the property for years, since 1985. I was working in acquisitions and sales, and all I knew was that Rams Hill was a struggling asset with a number of failed ownerships. When I first came to see the property, as a visitor, I didn't know what to expect. But I was blown away by the design and beauty of the surrounding area."

To quote the magazine: "In just a few short years, Rams Hill Golf Club has emerged from the desert floor to become one of the best golf courses in America, recognized today by Golf Digest as one of America's Greatest 100 Public Courses. It's been a team effort - from the championship Tom Fazio golf course revived with an assist from industry up-and-comers Jackson-Kahn Design to a memorable food-and-beverage experience crafted by golfers for golfers to a customer-service playbook executed by General Manager Harry Turner after his many years developing private clubs and resorts."

Turner stated that his first impression was "it was a gem."

"A gem that deserved to be recognized, and when I was hired, I made that my number one goal. And in my mind, the best way to gain attention in the golf world is to be in Golf Digest's top 100," he said.

"Tom Fazio certainly created a course worthy of inclusion - we just needed to have enough of their panelists visit our unique area of Southern California. Now, with the honor of being included in this extremely prestigious list, we have a great chance of introducing the 25 million golfers and golf travelers that are within driving distance from San Diego, Orange County and Los Angeles and golf travelers to the experience we've created out here in the desert."

It's also good news for Borrego Springs, as well as Rams Hill.

"As our message reaches more and more people, there will be more visitors leaving money with local restaurants and for room and board."

Turner believes the golfers who discover Rams Hill will also come back again and again and stay more than one day, an additional boost to community's businesses.

"Thanks to this notoriety, more people will fall in love with this desert community and its unique and wonderful qualities."

Turner added, "Thanks, also, to Golf Digest we will reach the golfers that have bucket lists, and plan to visit all the Top 100 courses."

Rams Hill is also listed by Golf Digest as one of California's Top Courses with other prestigious locals such as Rancho Santa Fe, and Torrey Pines, and other popular California courses in Lake Tahoe, Carmel, Monterey, La Quinta, and Palm Springs.

"Today, the course is not much different than when I first arrived. All it needed was a little cleanup work and some TLC. The bones were pure when I got here. However, we make it a practice to take on one major improvement every summer," Turner said.

Turner has brought more than management skills to Rams Hill. He came with 40 years working in the golf world, and plenty of contacts. To achieve the goal of making the list, Turner then embarked on contacting people he knew in the industry and invited them to come and visit the course. He also made sure that Golf Digest rating panelists knew Rams Hill was actively looking for panelists to visit.

According to Turner, the first thing needed was to increase the regional awareness of Rams Hill. Awareness was the key word.

"It became a pretty usual occurrence to hear first time players praise the course and then ask, 'How come I didn't know about Rams Hill?'"

The next step, taken by Turner's team was to aggressively market Rams Hill on three major social media platforms, such as Facebook, Instagram and Twitter, as well as using targeted eBlast.

"Social media has played a very important role in increasing project awareness to not only Southern California, but also nationally," he said.

"Lastly, we began welcoming golf influencers to enjoy Rams Hill who then spread the word of our wonderful course to the tens of thousands of followers. These efforts all paid off in creating the necessary awareness."

The course-ranking panel of Golf Digest has grown to more than 1,900 representatives who evaluate roughly 1,600 candidate courses throughout the United States and Canada. The rating occurs every two years, and as a result of the awareness campaign, Rams Hill received visits from a good number of panelists.

"Panelists that visited Rams Hill came from all over the country and different age groups. They weren't all super players. We probably had as many handicaps above 12 as below 12," Turner noted.

"I think it's cool that 'fun' was recently added as a rating category. I don't think golf is an old man's game anymore as it's frequently defined. In fact, although it's only anecdotal, I believe, the game is attracting younger players based on the average age of our current customers."

Turner also thinks that there's a new generation of golfers to be reached by selling on Instagram and other social media that reaches a younger crowd, which is more mobile and spontaneous; enjoys taking road trips with buddies; are healthier; and have less demands on their time than older players.

He also pointed out that business increased by rounds played in every category, including revenue, during the pandemic. As noted by many sports enthusiasts, many golf courses benefitted from the virus, due to the fact that it is one sport that allows for social distancing, doesn't require large crowds of spectators, and there is no physical contact among the players. Plus, it's played outdoors in natural environments where the virus has less potential to spread.

In conclusion, Turner stated, "This has been a total team effort from our entire Rams Hill staff. We all realized the importance of becoming a "must play" and "must visit" destination. The support of ownership ultimately made this possible by providing the resources necessary to manage and operate a golf course in the manner of the other prestigious courses on the list."

Besides achieving their goal, what could be better for Harry Turner, the team, and Rams Hill than being named in Golf Digests Top 100 Public Golf Courses? They are just weeks away from opening day, Friday, November 5.