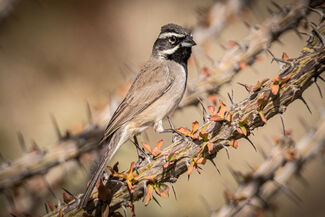 Many birds seen in Anza-Borrego are migrating through or seasonal visitors, but the black-throated sparrow is a local resident that you will find most common in the desert southwest and northern Mexico.

This true desert species is only rarely found west of the mountains, and has small, summer breeding populations in Utah, Nevada eastern Oregon and Washington, but they are most frequent in the Colorado and Sonoran deserts.

These handsome and energetic sparrows are a common sight in our local desert, often scouring the desert floor for seeds in flocks of a dozen or more. They love the shrubs and cacti of desert washes and adjacent boulder fields, and you can count on seeing some just about any time you are wandering about.

I have enjoyed watching them actively feed on the desert floor of Indian Canyon or dipping for water in the pupfish pond at the Palm Canyon trailhead.

Local populations are concentrated in the western portions of Anza-Borrego, becoming fewer in number in the more arid regions towards Salton Sea. It's rare to see a black-throated sparrow west of the mountains.

These desert birds have adapted well to their arid environment. Like roadrunners and cactus wrens, they can survive for extended periods without water, thanks to a super-efficient kidney system that helps them extract and retain moisture from their food.

Speaking of food, this sparrow has a seasonal diet variation, primarily eating seeds during the non-breeding season and adding grasshoppers, butterflies and moths, and other insects during their breeding season.

The black-throated sparrow lives close to the ground, feeding there and building nests low in shrubs such as creosote and mesquite. The five-to-six-inch cup nests are generally located five to seven feet above the ground.

Typically, the sparrow will begin nesting in the spring, but may produce a second nesting cycle in years of heavy rainfall and abundant food sources. Clutches will be three or four plain white, elliptical eggs that are less than an inch in length.

Keep an eye out for these distinctive neighbors with the black throat patch and crisp white bars on the head just above and below the eyes.