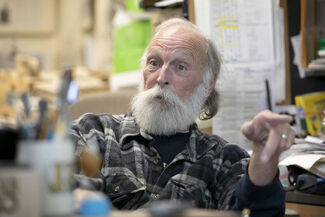 Michael Hart, publisher, editor-in-chief and photographer of The Julian News passed away at the age of 68 on Sept. 14, after a hard fought battle with cancer.

Hart, who was diagnosed with lung cancer last year, was receiving treatment at the Morris Cancer Center at UCSD Medical Center. The lung cancer later had spread to his brain.

After realizing they could no longer keep his health issue a secret with their readers, his wife and co-publisher Michele Harvey opened up about her husband's battle with cancer in The Julian News through her weekly column, "My Thoughts." With the news spreading like wildfire, many gave their love and sympathy, and even donated to a GoFundMe account in support of his battle against cancer.

Hart and Harvey acquired The Julian News on July 4, 2004 from Michael Carr. The newspaper was originally founded in 1984 by Buzz Thom, who sold it to Fredericka Foster, who was the daughter of a newspaperman in Imperial Valley, who later sold it to Carr.

Though for Hart and Harvey, running The Julian News was never just a job. It was a vocation. Harvey believes that her husband spent at least, if not more, than 80 hours a week in the newspaper office. In all that time, the couple took one three-day vacation to enjoy their honeymoon in Joshua Tree.

Hart had a philosophy for running the paper, saying, "The whole idea is that it's a community paper and the community will basically provide the information and usually I will take the lead and write whatever needs to be written."

As Hart continued his battle, the paper did what they could to serve the community, and continued to publish the paper, which included more content from third-party resources. But then for the first time in 17 years, the paper went dark in June.

The couple decided to sell the newspaper in May, asking for $300,000, as Hart continued his fight.

The Julian News prints about 2,000 issues every week, and is hand-distributed weekly to local businesses, markets, restaurants and sales racks in the community on Tuesday's, and is home-delivered by mail to nearly 300 subscribers on Wednesday. They serve many areas in the San Diego County, including Ramona, Ranchita and Borrego Springs.

Harvey also noted that her husband was the heart and soul of The Julian News, which has been the voice of the backcountry of Julian. And without him to guide the ship, it can't really sail.

The newspaper has temporarily closed its doors till it finds a person to take over. Hart's shoes will certainly be difficult to fill.