A Flying Horse, Baseball and Politicians 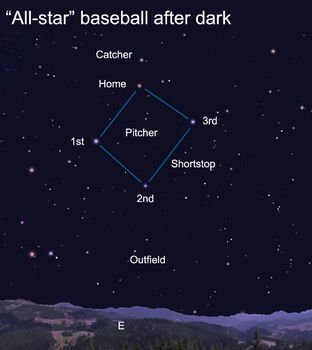 What do a flying horse, baseball and politicians have in common? Keep reading, and you'll find out.

But first, some astronomy!

Not long after sunset on Monday evening, gaze toward a low eastern horizon, and you will see a glorious full moon rising.

This is the famous "Harvest Moon," so named because it is the full moon that occurs closest to the autumnal equinox, which arrives this coming at 12:21 p.m. PDT (3:21 p.m. EDT). It is at that moment that we in the Earth's Northern Hemisphere will begin our autumn season.

The arrival of autumn will be a welcome relief from the blistering heat of summer, but not everyone will be so thrilled since it also nears the end of the 2021 baseball season. For most of us, our favorite team won't make the Major League Playoffs, but that's no reason to give up on America's favorite pastime. Simply look to the stars.

That's right. Though this great season of peanuts and Cracker Jack may be nearing its finale, we can look skyward for a celestial reminder of our collective baseball passion. High in the eastern sky after dark lie four equally bright stars that form what is commonly known as the Great Square of Pegasus. I prefer to think of it as the Great Baseball Diamond.

Highest in the sky, we see home plate; moving counterclockwise around the diamond, we can see first, second and third bases. With some imagination, you might even spot the pitcher, catcher, umpire, on-deck batter, third-base coach, and so on. Way too many outfielders, though.

The four main stars in the diamond are more classically associated with the front and mid-sections of Pegasus, the great winged horse of antiquity. In classical mythology, Pegasus was a magical beast. After its birth, Pegasus flew to Mount Helicon in Boeotia where the nine Muses lived. Upon striking the ground, one of its hooves opened up a spring of gushing water that became known as the Hippocrene, or The Horse's Fountain. It was said that drinking its water conferred on one the gift of poetry. And ever since, the figure Pegasus has been a symbol of poetry and the creative arts.

Interesting story. But finding a horse among the stars without some chemical assistance is another matter altogether. Not only is it a flying horse, after all, but it appears upside down. And if that weren't confusing enough, there's only half of an upside-down flying horse in the sky. Any wonder we have trouble making it out?

Now when the 2021 Major League Playoffs and World Series are history, Pegasus will continue to shine after dark as it has for millennia. For some, however, it might be a cosmic reminder of the current political climate in the U.S., for if you recall, only the front half of the horse appears.

Well, the ancient Greeks had an explanation that, I must say, I believe more every day. They claimed that the back half of the horse fell to Earth and became ... and I quote ... "the current breed of politician."

Change? Heh, heh, I think not!