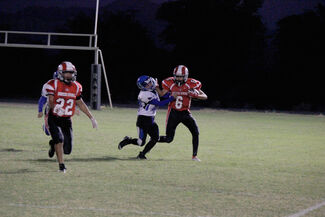 On a kick off return, sophomore tight end and linebacker Pedro Rodriguez stiff arms a Dragon's player before he ends up out of bounds.

The Borrego Springs Rams football team hoped to bounce back from their previous two games, and make a statement against one of the top teams in the Ocean League, the San Pasqual Dragons.

However, the Rams could not contain the Dragons, who knew exactly where to break through to get to the end zone, capitalizing on their speed. The Rams fell, 56 –12.

"They're another team that played in the spring; not to make excuses but we're down five starters on offense and defense and we have a bunch of freshmen and sophomores that are all rookies because they have never played football before," head Coach Tim White said.

"I know the score sucks, nobody wants to get beat like that, especially pretty much all in the first half, but I am proud of my kids. We got banged up again, but I don't think we got anybody injured or out for the next week, which is a good thing."

Despite the score on the board, the Rams managed to score two touchdowns, their first two touchdowns at home for the 2021 season.

The Rams were also slated to travel up the hill to face the Wildcats of Warner Springs in the annual "Battle of the Springs" game on Sept. 10. However, that game was canceled.

The team is still 0 – 3 overall and have yet to begin Citrus League play.

The last time Borrego Springs and SPA met was in 2019, when the Rams were in their first year competing in the Ocean League, and fell 74 – 29.

At that time, entering the match-up, the Dragons sat under Foothills Christian in the League standings.

The Dragons were on the board first early in the game with back-to-back rushing touchdowns from midfield. Only one of the two two-point conversions were good, and led 14 – 0.

The Rams were making some headway led by the efforts of senior quarterback and linebacker Cesar Ochoa. Sophomore running back and linebacker Francisco Garcia continued to push his way for the first down. However, despite the Rams efforts, the Dragons defensive line stopped them every time, proving to be a force.

The Dragons could not be stopped and scored twice before the end of the quarter, 28 – 0.

San Pasqual managed to pick up right where they left off to begin the second quarter, scoring a touchdown, 34 – 0.

The momentum began to shift with a big kickoff return by sophomore wide receiver and defensive back Wesley Sexton, which landed the Rams in San Pasqual territory on the 45-yard line.

Ochoa with a quarterback keeper pushed the Rams forward. Then help with a personal foul gave the Rams extra push for the automatic first down, and needed yardage.

With less than nine minutes to go in the second quarter and the half, Ochoa once again kept the ball, broke through tackles, finding open gaps, and was nearly taken down, but with the blocking from his friends, he made it to the end zone for a touchdown.

The first touchdown of the season at home for the Rams. The two-point conversion was no good, but the Rams were on the board, 34 – 6.

The Dragons quickly answered back twice to extend their lead, 56 – 6.

With two minutes to go, Sexton once again had a big kickoff return, but the Rams could not capitalize before the end of the quarter.

The third quarter, it was all Rams ball, never giving the Dragons offense a chance to take the field.

Vilchis and senior linebacker and running back Bryan Fuerte consecutively switched off to make their way toward the end zone.

With 1:20 on the clock, Ochoa with another quarterback keeper scrambled his way through the scuffle, outrunning a couple of Dragons for the touchdown. The two-point conversion was no good, 56 – 12.

The fourth quarter both teams were not able to score, and the Rams could not complete a comeback, resulting in the loss.

However, again, despite the score on the board, Coach White reiterated that this young team came to compete and was impressed at how great they held up.

Going into the next following games, White said, "We're going to try to win. It is my job get the kids prepared and ready."

"Everybody's ready to play football, but obviously when we're taking guys and putting them all over the place in positions they've never played before, you're coaching on the fly and trying to get them ready."

They will be back at home on Sept. 24 for their first Citrus League game of the season against crosstown rivals, the Julian Eagles. Kickoff for that game is 7 p.m.