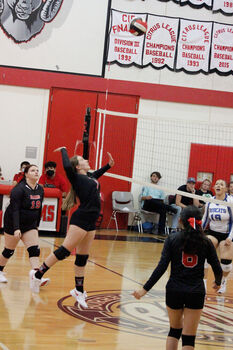 Minor mishaps here and there, but the Lady Rams still found a way to pull through with the wins.

Looking for another sweep of the Lady Bobcats at home on Aug. 24, and they did just that.

The Lady Rams had control early and all the momentum on their side. Many things were going the right way for the Lady Rams, and it seemed like a game of aces and errors, but it sure was a thriller. Borrego still had the upper hand and swept Hamilton, 25 – 13, 26 – 24, 25 – 19.

The team also traveled to face Calipatria once again on Aug. 26.

In the first set against Hamilton, Borrego took control early in the game.

With consecutive aces, missed opportunities and a kill by senior Brianna Del Bono down the middle, the Lady Rams found themselves up, 6 – 1.

There were long rallies by both teams, however, the Lady Rams kept their heads on, and extended their lead, 11 –2.

Del Bono secured consecutive aces to push the lead even further, but an error by the Lady Rams broke it, putting the Lady Bobcats finally on the board again, 16 – 3.

Borrego continued to rally and build their momentum, as senior Isabel Arteaga had a kill of her own, 22 – 6.

Sophomore Miriam Hernandez sealed the set win with a kill, 25 – 13.

The second set was quite different than the first, as the Lady Bobcats seemed to have built up a rhythm, keeping this one relatively close.

Both teams traded points back-and-forth, but junior Jimena Ochoa went up for the kill on the left side to break the tie. Ochoa had four on the game.

The momentum continued to shift, but the Lady Rams found a way to make it work in their favor, going away with the lead, 9 – 4.

The Lady Bobcats tied the game with back-to-back aces, 13 all. They also managed to take advantage of Borrego's errors, taking the lead for the first time in the game, 15 – 13.

With much back-and-forth, the Lady Bobcats still held on to the lead. But then an ace by freshman Ailene Arias, followed by a couple more by Arteaga, the Lady Rams pulled away, 24 – 22.

Arteaga had seven aces on the game. Hernandez had a team-leading 10.

It continued to be a thriller with both teams fighting for the last points and the set win. However, with a miscommunication and a tip missed by Hamilton, Borrego came out with the second set win, 26 – 24.

The third set looked like it would be a quick one, as the Lady Rams held a solid 6 – 0 lead. However, it seemed the miscues and errors began to catch up to the team, finding themselves only up by five, 16 – 11.

The Lady Rams did not let it get to their heads, and continued to build their lead. With one point to go, a side out by the Lady Bobcats sealed the win for the Lady Rams, 25 – 19.

Despite a dominant game, the Lady Rams do have a few things to continue to work on. However, their hard work is unmatched, and they can show how dominant they can be.

They also traveled to face Victory Christian, which took place after print.