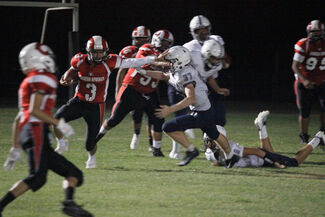 Football is back for Borrego Springs High School after taking the 2020 season off due to the uncertainty with the pandemic. The season is back, being under those gleaming Friday night lights (with the exception of one game), and have the stands rocking with fans.

"We're excited to be back with all the schools in the Southern Conference in the Citrus League, I feel really good about that, and ready to get back on track and start winning games," head coach Tim White said.

As many remember, in 2018, the Rams dominated the Citrus League with an undefeated record of 6 – 0, claiming the league championship. The last time it was done was in 2014 under the leadership of Andy Macuga, where the Rams also went undefeated, 10 – 0.

The Rams finished the 2018 season 9 – 2, and it led them to the semifinals of the CIF San Diego Section Division 8-Man football championships, but fell short against Foothills Christian, who has moved into 11-man.

The Rams did not have much luck the following season, and hoped to bounce back in 2020, but the pandemic had other plans.

Fifth year head coach Tim White hopes the 2021 season is a good one, and reiterates bringing home that championship again.

"We wanna a championship of course, but it's gotta start Friday. San Pasqual Academy is one of those teams that we got to play. They're gonna show up bigger, faster, stronger, and more prepared, so we just have to show up, put in the work at practice. Focus on that game, and as the cliche is, "one game at a time" and we'll take next week," he said.

In the Rams first game of the season, the team traveled to face San Diego Jewish Academy, a team they had not faced since 2010.

It was a hard fought battle, despite the 43 – 6 outcome. The Rams held the Lions scoreless in the second half, and avoided the shutout with a score in the fourth quarter, but the efforts weren't enough.

The Rams were back in front of their home crowd on Aug. 28, a Saturday night under the lights, facing the Horizon Prep Lions.

With their offense and defense shaken up throughout the game due to injuries, the Rams did what they could, but could not overcome the dominance of the Lions, and were shutout 40 – 0.

"Bigger. Faster. Stronger. More experienced. Just like last week (against SDJA), playing against these teams early this year has been tough because they just got done playing a season, and they look like they had a season – spring ball, mid-summer – and are clicking on all cylinders. Our kids need to be a little more consistent in showing up for practice and putting in the work," White said.

"We ended up playing our JV in that second half basically with Cesar (Ochoa) out there, couple of varsity kids, cause the rest got knocked out of the game, and I was so thoroughly impressed, and excited about the future. But we're in the present. I'm tempered with the fact that we still got beat pretty good on the field, but very impressed with the group of kids that were out there."

The first quarter was very defensive, as both teams went back-and-forth, holding each behind the 50-yard line.

However, with less than two minutes left to go, the Lions found their way to the end zone with a 23-yard touchdown run. Their extra point attempt was no good, but they led, 6 – 0.

The Lions managed to score again to begin the second quarter, and attempted a two-point conversion, but were stopped short of the goal line, 12 – 0.

The Rams attempted to answer back with a huge kick off return by sophomore linebacker and running back Francisco Garcia.

With 11:12 on the clock, Garcia ran the kick off return for 98-yards before being tackled at the two-yard line.

However, the Rams could not score and turned the ball over on downs, and were still down, 12 – 0.

With 4:43 left to go in the half, the Lions scored once more and again, the Rams had another chance to answer back.

Weaving in-and-out of a scuffle, breaking through a hole left open by the Lions line, and coming back from a would-be injury earlier in the quarter, senior quarterback and linebacker Cesar Ochoa ran for about 72 yards in what would have been the Rams first touchdown at home for the season, but was called back due to a flag near their 40-yard line. Unfortunately, the Rams could not score.

Heading into the third quarter down 19 – 0, the Rams had a chance to change the momentum of the game.

Ochoa with the quarterback keeper brought the ball to the 39-yard line for the first down. However, once again, the Lions defense managed to hold the Rams from touching the end zone.

With another score by the Lions and the extra point, they extended their lead, 26 – 0.

The Lions scored twice more in the fourth quarter and the Rams tried to get on the board.

Junior running back and linebacker Angel Vilchis chipped away after a good run on the kick off return, but the Rams just could not answer back, resulting in the shut out loss, 40 – 0.

The Rams are back on the field at home Friday Sept. 3, 7 p.m. against San Pasqual Academy in a non-league conference game.