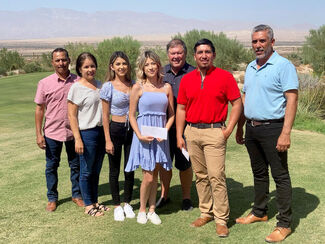 Three grateful students recently received a $1,000 scholarship from Rams Hill General Manager Harry Turner. These young Borrego folks are Danitza Fuentes who plans to attend Cosmetology School in San Diego, her sister Ana Fuentes who will attend her second year at Mesa College majoring in Radiology, and Fernando Alcaraz who will continue for his second year at the University of California San Marcos studying Business Administration.

These students and their parents were all smiles and grateful when Harry Turner delivered the checks at Rams Hill last week. Applications were strenuous and required official transcripts, essays, letter of recommendation, a copy of college acceptance as well as a statement by the student of all community and civic activities in which s/he is involved.

This is not the first time that Rams Hill has been caught supporting our families and students. Recently, it was discovered that Rams Hill kept many employees on payroll during the summer months in order to ensure them a paycheck when normally folks would be let go until the next season. This gesture of kindness and generosity also extended to the community when Harry Turner invited these summer workers to donate their time to other activities in the community such as painting at the school district. For this, the Borrego Springs Unified School District is most grateful.