Will Space Become Another Ocean of Waste? 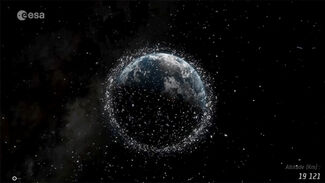 Large amounts of colliding space debris have resulted from increased commercial space activities. Outer space remains classified as an eminent domain or a global commons. All space activities need to be regulated for humanity and the planet's best interest. Researchers agree low Earth orbit's (LEO) current state is a tragedy.

"There are approximately twenty-three thousand pieces of debris larger than a softball orbiting the Earth at speeds of 17,500 mph. Fast enough for a relatively small piece to damage a satellite or a spacecraft or impact Earth," says NASA (n.d.). The unknown consequences of the debris resulting from the increased space activities is a call to action for stricter global regulation.

The Outer Space Treaty of 1967 defines space as an eminent domain requiring global civility and cooperation. "The concept of the common heritage of humankind conveys the idea that the management, exploitation, and distribution of the natural resources of the area in question are matters to be decided upon by the international community. They are not to be left to the initiative and discretion of individual states or their nationals," said Hutagalung (2021).

"They required extreme care in planning and conducting new space activities from now on, especially in a phase of increased and ever more rapid exploitation. At the beginning of 2020, the SSN (Space Surveillance Network) sensors tracked twenty-three thousand objects.

Twenty-thousand objects that were officially cataloged," says Pardini (2021). The number of space launches has tripled in the last year. In three to five years, I project space will increase by threefold.

The considerable increase in space debris poses a fatal consequence to astronauts and machinery. "The number of satellites placed in orbit grows as well as the potential for collisions, further increasing the likelihood of additional space debris as well as wasted resources," says Mrusek (2021).

SpaceX poses reusable parts that are retrieved with precision. Eco-friendly procedures as a standard practice with all space activities would regulate debris. "In Low Earth Orbit ("LEO"), properties as small as one centimeter in diameter generate massive energy that it can knock a satellite out of its orbit.

In fact, space debris shows the possibilities to disrupt national security," says Hutagalung (2021). Debris collisions threaten all communications satellites, even triggering the Kessler Effect, resulting in an impenetrable LEO. The scientific community has labeled the amount of and continued increase of accumulated space debris tragic. "Zombie satellites, rocket shards and collision debris are creating major traffic risks in orbits around the planet. Researchers are working to reduce the threats posed by over 20,000 objects in space," says Witze (2018) who also breaks it down in the figure above.

Much of what is orbiting around the planet is inactive, inoperable, or abandoned devices. "This term (space debris) doesn't even appear in texts. At the time of preparation of the above treaties, the problem of space debris was still in the distant future. But now, with 90 – 95% of all trackable objects being space debris and with the widening realization of risks to active satellites, it is no longer possible to ignore the situation," states Perek, (2002).

Arguments state that there are scarce resources to address the threatening pollution on the surface of the planet. Why should we care about space? Where are the resources going to come from to clean up LEO? Stricter regulations, fines, accountability, and consequences need action while the existing and future space community needs to follow an eco friendly protocol. Renewable rocket launchers and commercial companies like SpaceX, will dilute the enormous costs of a space launch by the 22nd century.

Outer space needs to be sanctioned as a global park with an expensive membership. This fund would allow for protection, maintenance and long-term cleanup projects. Collecting universal fees could not only sustain and maintain the existing systems in place, it could create infrastructure for the future orbital traffic.

In conclusion, recent evidence reveals space debris as a serious threat to our surface and satellite communications. Astronauts and satellite engineers are facing additional risks with the accumulating debris slicing through the LEO. With yearly launch numbers breaking into the thousands, the debris will thicken. Could it affect the sun and compromise Earth's already fragile weather system? If we continue to pollute the outer sphere, like our oceans, there will be no viable solution for change.