The Celestial Queen and the Lizard 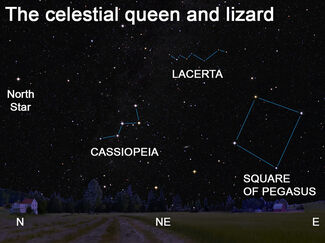 People have searched the stars for shapes since ancient times. The constellations Cassiopeia and Lacerta form the shapes of the letters W or M in the late summer sky.

Stare at the stars long enough and you're bound to find some that trace familiar patterns. That's certainly what the ancients must have done so they could use the sky as a picture book for their stories.

I always enjoy searching for geometric figures, probably because they're so plentiful. A point, of course, is too easy – each star forms one of these! Lines and triangles are easy too, as any two stars form a line and any three form a triangle. The brightest triangle in our evening sky right now, of course, is the Summer Triangle, high overhead after dark in late August. Spend enough time gazing skyward and you'll even find a square, tonight midway up in the east-northeastern sky.

Letters of the alphabet are fairly common too, as long as you have a good enough imagination. Now, while these aren't abundant, there is one that's easily visible on late summer evenings. It appears in a region of the northeastern sky known as Cassiopeia.

Cassiopeia is the constellation named by the ancient Greeks after an Ethiopian queen. She was said to have been so obsessed with her own beauty that, when the gods placed her in the heavens, they put her in the northern sky so that she'd revolve daily about the north celestial pole (where the North Star currently resides) and spend half of her celestial life upside down. Pretty vindictive, if you ask me!

The Persians, however, saw the prominent "W" shape of the constellation as a kneeling camel, while some in the Inuit culture of Canada and Greenland knew it as Pituaq, a lampstand. Some can even outline the stars of this region as the throne on which the queen sits, though I've never had much luck with that.

Maybe I just don't have much imagination; to me, it simply appears as a "W".

Not always, however. Cassiopeia is one of those constellations that, as it revolves about the North Star during the night – and throughout the year – appears as four different figures. Right now, of course, it appears as a "W". When it's on its side, it can look like an "E" or even a "3". And when it's high above the North Star, it looks like an "M".

Just above and to its east lies another "W". It appears almost like a miniature version of Cassiopeia, but it's actually the northern side of the constellation Lacerta, the lizard. You'll need a dark moonless sky to see it, since it contains no bright stars.

Lacerta is one of seven relatively obscure Northern Hemisphere star groupings created and introduced by the Polish astronomer Johannes Hevelius. Hevelius created Lacerta to enclose the stars of such a tiny area of the sky that no other constellation would fit it. Some think that he may have been inspired by the ancient Chinese, who saw this celestial region as a flying serpent.

If you've got a good dark sky, you should be able to trace the outline of a lizard, but to me, the five stars on its left-hand side seem to form a figure not unlike that of Cassiopeia. I just call it Cassiopeia-Lite!