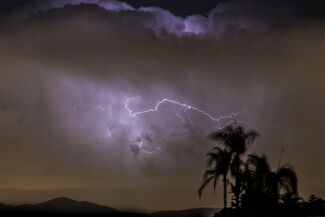 Visitors and residents alike were treated to a spectacular sky show recently when tropical storms from Mexico brought an intense display of lightning to the night sky of Borrego Springs.

As one of nature's most dramatic events, how can you capture this with your camera so you can share the drama with friends?

It's much easier than you might think, requiring no special equipment other than a sturdy tripod and digital single lens reflex camera with adjustable exposure settings.

First, let's talk about safety.Lighting is dangerous and can be deadly. If you plan to be out in an electrical storm, avoid a mountain top, tall trees, or metal structures, all of which attract massive electrical discharge. If you do see a storm getting close, it's a good idea to seek shelter.

By the way, you can tell how far away lightning is by counting the time between the flash and hearing the thunder. The sound travels at roughly 1,000 feet per second, so if you hear the thunder about five seconds after the flash, it was about a mile away.

Lightning happens when weather conditions create an electrical imbalance between clouds and ground or adjacent clouds. The instantaneous burst of electrical discharge can produce deadly amounts of electricity, heated to temperatures hotter than the sun.

It also produces deafening thunder and a spectacular sky show, especially at night.

During the summer and early fall monsoon season, Borrego is often treated to this fearsome, but beautiful display of nature.

Capturing lightning in the daytime is very challenging because the length of a strike is less than .2 seconds. You could not react that quickly to trigger the camera.

There are sophisticated and expensive lightning triggers you can buy for a camera, but if you simply wait until after dark, it's much easier to get that WOW image.

At night, the lightning itself becomes the flash that takes the picture.

Watch the storm for a bit to see where most of the lightning activity is happening. Point your camera in that direction and make sure it is focused at infinity.

If your camera has manual settings, select a 10 second exposure time and set the f-stop to f- 8 to start with. Your ISO should be at 400.

If you have an external or built-in timer, just turn it on and let the camera begin taking pictures.

Ideally, during one of the 10 second exposures, a bolt of lightning will strike and will be captured by your camera.

Since it's dark, the lightning provides the light necessary to expose the scene.

Lightning can be intensely bright, so check your exposure after capturing a few bolts and make changes to f-stop of ISO if necessary. Time is not a factor, because nothing is being recorded until the lightning strikes.

Your shooting location should be away from bright lights and put some thought into what might be silhouetted when the lightning flash occurs.