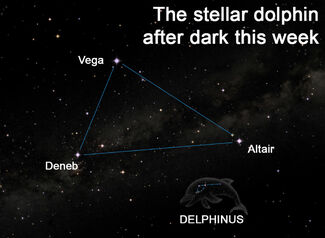 The stellar dolphin after dark this week.

Whenever I'm out under a dark summertime sky sharing the stars with the public, I always try to point out the largest and most beautiful constellations. I'm always amazed to learn that one of the crowd favorites is neither the brightest nor the most famous, but rather one of the smallest and faintest. In fact, the constellation to which I'm referring usually elicits gasps of excitement from those who see it for the first time.

It's known as Delphinus, the dolphin.

Stargazers far from city lights will have little trouble spotting Delphinus high in the eastern sky at this time of year. To find its faint stars among the stellar maze, however, you'll first need to find something much more familiar, such as the Summer Triangle.

Many of my regular readers already know the Summer Triangle. After dark at this time of year, go out and gaze nearly overhead after dark, and you'll see its three stars shining brightly.

At the westernmost vertex of the large triangle lies the brightest of the trio: Vega. Vega, you may recall, is the most prominent star in the constellation of Lyra, the harp. The southernmost star of the triangle is Altair, which marks the constellation of Aquila, the eagle. Completing the figure is Deneb, the faintest of the three stars, forming the tail of Cygnus, the swan. And, if you have a sufficiently dark sky, you'll easily see the bright star clouds and dark rifts of the Milky Way flowing south to north through the great triangle.

Once you find this celestial marker, you should be able to locate Delphinus, just to its east, and see the tiny outline of a dolphin leaping from the water toward the north. The Hindus knew this star grouping as a porpoise, the Arabians as a riding camel; and in early Hebrew tradition, it was sometimes identified with the Great Fish of Jonah. Its four main stars form a grouping that some call "Job's Coffin," though the origin of this name seems lost in history.

Its two main stars, Sualocin and Rotanev, were first mentioned in 1814 in a star catalog, published at the Palermo Observatory in Italy. Read backward, these two words form the name "Nicolaus Venator," which is the Latin version for the Italian name Niccolo Cacciatore who, at the time, was the assistant director of the observatory.

According to one legend, Delphinus is the dolphin that carried the Greek poet Arion safely to shore at Tarentum, allowing him to escape his enemies. The figure of a youth on the dolphin appears on a classic series of silver coins issued at Tarentum in southern Italy around 370 B.C. Delphinus also appeared prominently on the splendid coins of Syracuse in Sicily, dating from about the fifth century B.C. In fact, the silver coins designed to commemorate the great victory over the Athenians in 413 B.C. have been considered by some to be the most beautiful of all time.

Find the dolphin in the sky, and you'll see why it's been the object of so much admiration through the ages. Delphinus – as tiny and faint as it is – is truly a stellar sight!