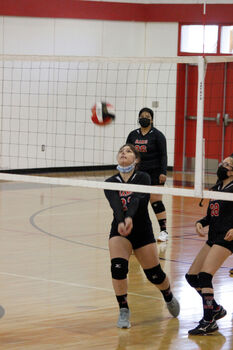 The JV Lady Rams volleyball team went head-to-head against Victory Christian Academy in their first game of the season and home opener, Aug. 12.

The team also traveled to Hamilton High School, and played the Lady Bobcats, which took place after print.

Against the Lady Knights of Victory Christian, the Lady Rams were able to take advantage of errors committed, and pulled ahead, 8 – 5 to begin the first set.

The Lady Rams found some rhythm and took control of the rallies. However, the Lady Knights were not going down without a fight, and kept the game relatively close.

But it was the service errors that were the Lady Knights downfall, leading to a 25 – 18 set win for Borrego.

The second set began similar to the first, as the game was kept close.

The Lady Rams had a good rally going, but then found themselves down by one.

It was an exchange of errors and aces, with Borrego on the winning end.

With a lot of new faces, and a year off of not playing because of the coronavirus, it was nice to see the Lady Rams back in action.

Their next game at home is Aug. 19, 4 p.m. against Calipatria