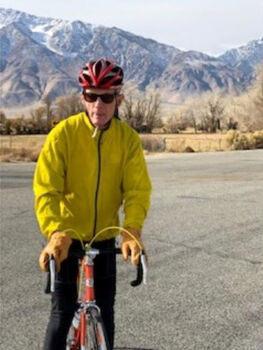 MADISON – "Even death is not to be feared by one who has lived wisely." – Buddha

John Angle, age 79, of Sun Prairie, Wisconsin, beloved twin brother of Burr Angle of Madison, passed away at Agrace Hospice in Fitchburg on Sunday, Aug. 8, 2021, from complications of cancer. John's family is grateful for the good care and compassion of his oncologist, Dr. Sam Lubner, Carbone Center, UW Hospital.

John was born Sept. 2, 1941, in Orange, N.J., the son of Donald Morrison Angle and Josephine Choate Angle. A graduate of Thomas Jefferson High School in Dallas (1959), John earned his undergraduate degree in aeronautical engineering from San Jose State in California, and was also certified as an airplane mechanic. His life's work was in the aircraft industry, designing and safe-proofing various aircraft on and near the west coast including commercial and military aircraft and some aircraft intended for acrobatics. He served in the army at Ft. Ord in California.

John married Sandra Sue Angle in 2002. He and Sandy lived in Borrego Springs and Mammoth Lakes, California, and at Revel Rancharrah in Reno, Nevada.

An avid cyclist, when he retired at age 60 John rode his yellow bicycle, called Tweety Bird, from California to Maine, via Canada. Together John and Sandy hiked the Pacific Crest Trail in California from Mexico to Canada. They also spent many years traveling in the Scandinavian countries and Europe. John was also a mountain climber, making good use of his ice axe on the mountains on the west coast.

Preceding John in death were his parents, his brother Burr and his wife Sandy. John is survived and deeply missed by his sister, Jean Williams, of Ocala, Florida; his niece, Ann DeVoy of Bonn, Germany; his nephew, John DeVoy (Pam) of Chicago; his sister-in-law, Dolores Kester (Burr Angle), of Madison; Donna Willis of First Light Home Care of Reno, Nevada; and a long-time friend, Julie Rossmau of San Diego, California.

In lieu of flowers, donations may be made to Agrace Hospice in Fitchburg (https://www.agrace.org); or the Alzheimer's & Dementia Alliance of Wisconsin (www.alzwisc.org). Memorial services to be scheduled at a later date. To view and sign John's guestbook, please visit http://www.ryanfuneralservice.com.