Teapot and the Milky Way 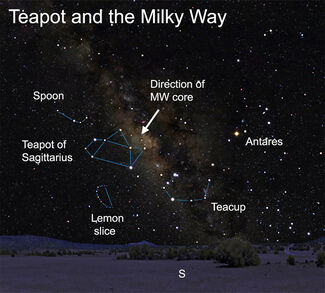 Near the teapot, we can even find stellar outlines of a sugar spoon and a slice of lemon formed by the southern constellation Corona Australis and the Southern Crown.

Nothing in the heavens says "summer" to Northern Hemisphere sky watchers quite like the constellation of Sagittarius. On late July and early August evenings, we can find this prominent star grouping low in our south-southeastern sky just after dark.

Sagittarius, the Archer, is often depicted as a centaur: a half-man and half-horse creature, most likely because ancient Greek and Roman authors often confused Sagittarius with Centaurus, a constellation farther to the southwest.

Interestingly, however, its origin may have come much earlier than this; the stellar figure seems to personify the Archer Nergal, a god of war who was inscribed on ancient Sumerian cuneiform tablets. It's even included as a "Horse's Head" or "Horseman" in the 3,000-year-old zodiac of India, while the human part of the figure is depicted by a fan of lions' tails owned by the wife of an Indian ruler.

Of course, you can search for a horseman or archer among the stars if you'd like, but if you'd prefer to save your sanity, forget about these ancient images and look instead for the outline of an old-fashioned teapot. Here you'll find eight stars that trace its body, handle, lid and spout.

Near the teapot, we can even find stellar outlines of a sugar spoon and a slice of lemon formed by the southern constellation Corona Australis and the Southern Crown. You can even find a teacup outlined by the bottom half of Scorpius, the scorpion.

Stargazers with a moonless sky far from city lights will see a hazy cloud of "vapor" streaming upward from the teapot's spout. This is the Milky Way that seems to rise out of the southern horizon and stretch completely across the sky to the north.

The section of the Milky Way just above the teapot's spout marks the direction of our galaxy's center. Though no one can see its core directly because of all the gobs of interstellar material filling the nearly 26,000 light years that separate us from it, astronomers suspect that a supermassive black hole might lurk in this galactic core.

The first thing you'll notice about the Milky Way is that it's not uniform in brightness. It is, instead, mottled with dark rifts along its entire length. These are known to astronomers as giant molecular clouds: massive clouds of interstellar dust that stand in stark silhouette against the Milky Way's brighter stellar band. It is within these GMCs that massive star- and planet-forming regions exist, hidden from eyes not capable of seeing infrared radiation.

Scan binoculars along the Milky Way on a clear, dark night, and you'll be impressed by all you can see. Not only will binoculars reveal countless stars invisible to the eye, but also dozens of deep-sky objects, or "faint fuzzies" as astronomers like to call them; these include star clusters and gaseous nebulae. All will appear as small, hazy smudges of light, but if you've got a small telescope, aim it in their direction for an even closer and more impressive look.

I think you'll agree that exploring this region of the heavens from a dark sky site can be a relaxing and wonderfully stellar way to spend the warm nights of summer!