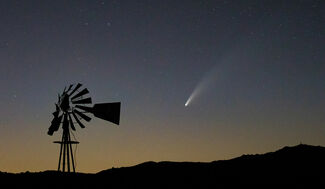 Visitors and residents of Borrego Springs will not have to travel far in early August to enjoy a spectacular celestial show as the annual Perseid Meteor Shower appears in the midnight sky.

The Perseids, so named because they seem to radiate from the Constellation Perseus, is one of the more exciting sky shows each summer.

Most people have seen the random flash of a meteor as this tiny speck of space dust ignites as it enters our atmosphere.

But a meteor shower can be stunning with as many as 50 to 75 fireballs per hour streaking through the night sky.

City dwellers will see far fewer, because many are not very bright and will be lost in the urban light pollution. But Borrego's distinction of being designated as an International Dark Sky Community means viewers will have a ringside set and excellent viewing conditions.

You can expect Borrego's rural roads and many areas of Anza-Borrego Desert State Park to be filled with eager sky watchers for this prime heavenly event.

Another bit of good news is that there will be no competition from bright moonlight.

This year, the moon will be setting about 10 p.m. on the peak night of the meteor shower and will only be a sliver with 13 percent illumination.

The Perseids are tiny particles that have sloughed off the comet 109P/Swift-Tuttle every time it makes another trip through our Solar system.

This dust cloud arrives here about July 17, but the peak of meteor activity is predicted to be between the nights of Aug. 11 to the early morning of Aug. 13. Meteor numbers will decrease nightly until the dust cloud passes, about Aug. 24.

Nothing is required to see the show, other than a comfortable chair and a good viewing location away from bright lights.

A reclining chair or gravity chair is a great way to relax and enjoy the sky show, and bring some cold drinks, a snack or two and your friends and family.

While you are likely to see a few meteors in the early hours after sunset, the best time to see them is after midnight. This is because the rotation of the earth turns us into the dust cloud after midnight and it's those wee hours before dawn that will produce the most active show.

Think of it as driving into a cloud of bugs. There will be more bugs on the windshield than on the back window. Because of the sometimes-bright fireballs created as this cosmic dust burns up in our atmosphere, many think meteors are larger objects. Most are nothing more than grains of sand that ignite when slamming into earth's atmosphere at a speed of 40 miles per second. The extremely bright meteors may be caused by something as large as a pea.

There is something quite peaceful and humbling about a star-filled sky on a clear, moonless night. Adding the flash of a streaking meteor is like the final note of a captivating symphony.

There are big and little meteor showers throughout the year, but I consider summer the beginning of meteor season because the evenings are warm and pleasant, the brilliant Milky Way hangs in the night sky and it's just more enjoyable to be outside.

Photographing a meteor shower can be challenging, but with modern digital equipment, it can also be quite rewarding. Photographers should have a solid, steady tripod, high resolution digital camera, wide angle lens and a "fast" lens with a maximum aperture of at least f2.8.

Focus is critical, and it's very hard to do after dark, so experiment in the daylight focusing on very distant objects and mark that focusing spot on your lens so you can duplicate it at night. Start with an exposure of about 25 seconds and an ISO setting of 3200. It also helps if you have an electronic timer or built in timer that will allow the camera to trigger without being touched.

If you are lucky, the wide-angle lens will capture that spectacular fireball as it enters the earth's atmosphere, streaking past the Constellation Orion.

Meteor showers can become addicting, and Borrego is just the place to feed that addiction. The next major shower will be the Orionids that extend from Aug. 25 through Nov. 19 but peaking on the night Oct. 20 – 21 with 10 to 20 meteors per hour. Unfortunately, the moon will be full at this time, so viewing this year will be compromised.

This can be a spectacular show, known for producing bright and intensely colored fireballs at the rate of up to 120 per hour.

The Geminids arrive around Dec. 4 and continue through the 17th, but peaking on the night of Dec. 13 – 14. The moon will be nearly full, but setting before 2 a.m., so there should be a few peak hours of spectacular viewing.

A meteor shower is something that many people have never seen, but Borrego locals and smarty visitors can be here to enjoy them several times each year.

Meteors are not the only show in the sky and there are dozens of smartphone and tablet apps to help viewers locate fascinating sky objects.

After the New Year, check your apps for other events like the Quadrantid meteor shower in January, Lyrids in April, and eta Aquariids in May.

But you don't need a meteor shower for an excuse to enjoy the spectacular night sky. If you are really into discovering the outdoor world, there is much to explore once the sun goes down.

There are satellites moving through the heavens, planetary movements, comets and a whole different nighttime world of animals that you may encounter.

You'd be surprised what you might discover by spending a few hours sitting under a sparkling night sky.