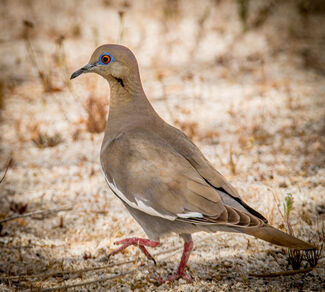 You don't see a lot of birds in the summer heat of Anza-Borrego, but one of the more common spring and summer species is the white-winged dove.

On a recent afternoon walk around the Anza-Borrego Desert State Park visitor center, several dozen were observed as they made their characteristic wing whistle when taking flight.

Easy to identify by their blue-ringed eyes and thick white bar along the edge of their folded wings, this species of dove is more commonly associated with the desert.

These plump, medium-sized birds are an overall brownish gray and with pink or reddish legs and bright red eyes. Often you will hear them before seeing them, especially in the mornings when they softly coo.

White-winged dove are resident birds here, but their numbers swell each spring and summer, peaking around mid-August when migrating flocks come north.

During their summer visit they will nest, generally producing two white eggs.

They are not particular about their nest sites, sometimes locating in a flowerpot or even window planter box, which can be a delightful experience for the lucky residents with a ringside seat.

By September, the migrating visitors will have completed their nesting cycle and begin returning south to winter homes along the southwestern coast of Mexico.

This species of dove is a delightful garden visitor who will eagerly accept your offering of bird seed and a drink from a fountain of fresh water.

In the wild, they eat exclusively native seeds, grains and fruit and do not supplement their diets with insects like many other grain eaters.

These birds have adapted well to humans, expanding their range as human population has grown along with agriculture and the planting of ornamental trees that offers them feeding and nesting locations.

In the open desert they will frequently build their bowl-shaped nests in mesquite, willows, ironwood, and tamarisk trees.